You Stupid Boy
Home NZ Politics Should the Prime Minister harden up and show NZ First who’s in...

Should the Prime Minister harden up and show NZ First who’s in charge? 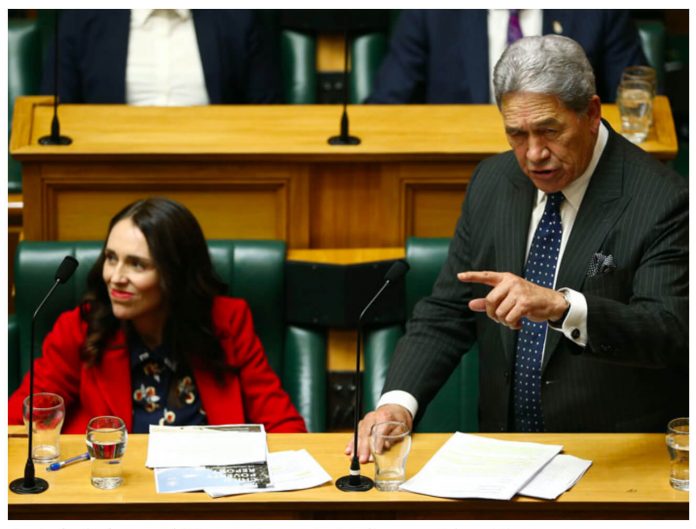 Eleven and a half years after being voted out of office, Helen Clark still packs a political punch. Seeing her weigh in recently over Radio New Zealand’s plans to scrap its Concert programme brought back memories of the steely persona she presented throughout three terms as Prime Minister from 1999.Even without access to the levers of power, Clark is a plain-speaking force to be reckoned with.

On the political platform du jour, she tore into RNZ’s proposal, in one emphatic tweet claiming it equated to “a dumbing down of cultural life in NZ”. In another, she put the acid on Labour ministers Grant Robertson and Kris Faafoi, reminding them Labour had pledged in 2017 not to cut the funding for or quality of services, including the Concert programme.

This was no run-of-the-mill interjection by some silly old “Angry of Mt Albert”. Clark’s campaign-in-miniature combined her trademark clarity of expression with her well-honed strategic instincts, applying the blow torch where it would be most effective.

Never mind that Robertson is now finance minister and one of the Ardern Government’s most influential figures; he could have been excused a flashback to the stint he spent as a mere adviser in Clark’s prime-ministerial office, where he will have borne daily witness to her steel-trap analysis and unwillingness to suffer fools.

That would be one possible explanation for the deferential tone of his response to her instruction – sorry, “hope” – that ministers take an interest in RNZ’s move: “We will Helen. I am advised it is still a consultation and we will be talking to RNZ about their options.”

And, lo, the proposed restructure was binned, and Clark’s interjections widely cited in coverage of the U-turn.

Clark’s force of will was the superpower that enabled her to hang onto the leadership of the Labour Party in Opposition, despite abysmal personal poll results and the best efforts of senior Labour colleagues to move her on. Once in government, it kept her there, expressed in the tight political control exercised by her personally and by her lieutenants, including chief-of-staff Heather “H2” Simpson. Clearly, it remains in full working order.

Her successor, John Key, was similarly single-minded, even if his “whatever it takes” determination simmered beneath a more relaxed demeanour.

Both Clark and Key were clinical in identifying threats to their grip on power, and acting decisively to deal with them.

It was clear from early in her career that Jacinda Ardern was a very different kind of politician. Her personal charm and charisma helped her rise through the Opposition ranks, but her profile in the big debates of the day – and even the ever-roiling internal ructions within Labour – seemed negligible. Scoring hits on the Government or pursuing ministerial scalps? Not really her forte.

In some ways, her ascent seemed something that happened to her, rather than a result of her own ambition. She traded in a line of self-deprecation not usually associated with the unforgiving political world. In late 2015, though long identified as a rising star, she declared herself too “selfish” to want to lead the Labour Party, that she’d rather have a private life. Even in June 2017, as deputy leader, she told Next magazine of being “constantly anxious about making mistakes” and too “risk-averse” to be Prime Minister – at that stage, anyway.

The rest is history. Within seven weeks of that magazine hitting the newsstands, she was Labour leader. Seven weeks after that – and amid the phenomenon of “Jacindamania” – she led Labour to a healthy enough election result that Winston Peters could play queenmaker, snubbing National and handing Ardern the prime ministership.

In office, too, her approach has borne little resemblance to that of her strong-willed recent predecessors – including the gritty Bill English.

Early on, her Government seemed ill-prepared and dithering, resorting to working parties rather than action. Then the flagship policy of KiwiBuild turned into a debacle, and the Tax Working Group that recommended a capital gains tax turned out to be an almighty waste of time.

Ardern’s surefootedness on the international stage and in the aftermath of the Christchurch mosque attacks has been rightly lauded, but in the day-to-day business of government, she has too often seemed to be clinging to the wheel of a misfiring jalopy rather than the well-oiled administrative machines steered by Clark and Key.

For much of that impression, Peters and New Zealand First should carry the can. They have wielded an influence – and effective power of veto – out of proportion to the 7.2% of support they won at the 2017 election. Ardern has been too often put on the defensive, trying to play down coalition disagreements or respond to the latest bout of grandstanding by freewheeling NZ First controversialist Shane Jones.

A recent decision to block well-advanced plans to cut the price of electric vehicles by up to $8000 was just the latest example of NZ First’s willingness to derail policies dear to Labour or the Greens, emphasising the contradictions at the heart of the Government.

Now, with the election looming, the coalition has to operate under the cloud of a Serious Fraud Office (SFO) investigation into the New Zealand First Foundation, which received donations the Electoral Commission believes should have been treated as political donations to the party itself. The commission referred the matter to the police, who in turn passed it on to the SFO.

The case has echoes of a NZ First donations saga back in 2008, when an SFO investigation led to Peters standing down as Foreign Affairs Minister in the Clark Government. This time, however, Peters has stayed put, exposing Ardern to a chorus of condemnation for not demanding he give up the deputy prime ministership, at least temporarily.

Typically, his response to revelations and questions about the foundation, and the photographing of journalists who have worked on the story, ranged from the merely cantankerous to the downright bizarre: playing reporters “Radio Gaga” on his phone, and hosting an over-hyped social-media Q and A with sound-quality issues.

He presumably believes he can talk to the public over the heads of the media throng, à la Donald Trump or Boris Johnson. And Ardern and her advisers also seem to believe they won’t be too badly damaged by association with Peters’ shenanigans, or the underlying donations issue, which might not seem as important to people outside the political arena as it does to the exasperated commentariat.

But the case presents her with an alternative to just nursing her Government through to the election and hoping her personal X-factor will prevail: it’s a chance to show some steel, and change the dynamic. Requiring Peters to step aside would neutralise claims the tail is wagging the dog and also give a tantalising preview of a post-Peters future that – barring cryogenic intervention – must come sooner or later.

National’s decision to rule out working with Peters gives her licence to assert her authority in the firmest terms, and offer hope that the lofty goals of Labour and the Greens will not forever be thwarted by the coalition’s troublesome junior partner.

In the face of global crises such as the coronavirus and its economic fallout, and their ominous implications for New Zealand, Ardern has little choice but to hold tight and maintain a brave face. But the domestic challenges presented by NZ First offer plenty of scope for prime ministerial intervention.

So will she find her inner Helen Clark and put Peters in his place? Almost certainly not. After all, she didn’t get this far by throwing her weight around. And, as she says herself, she’s risk-averse.