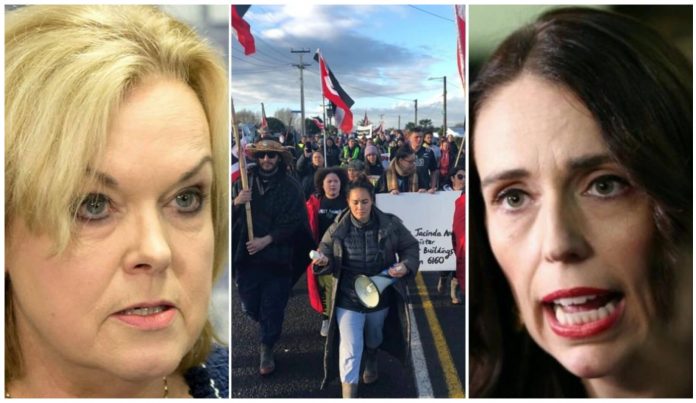 National leader Judith Collins has hit out at Prime Minister Jacinda Ardern’s involvement in the Ihumātao land dispute, describing it as “foolish” and “a total nonsense”.

Ihumātao is an area of historical significance for Māori near Auckland Airport, where activists have been protesting against Fletcher Building’s plans to build almost 500 homes on land it purchased, that was confiscated in 1863 by the Crown.

Protesters from the Save Our Unique Landscape (SOUL) movement say the land should be returned to Māori, and occupation of the land ramped up in July 2019 after police served occupiers with an eviction notice.

The Prime Minister negotiated a temporary halt to construction at the site in July 2019 while a solution was sought – but a year has passed and nothing has been announced, despite speculation throughout the year that a deal is near.

Collins, who became the National Party’s new leader last week following the resignation of Todd Muller, said Ardern should never have got involved, and that if she becomes Prime Minister, Fletcher Building will be allowed to continue with its plans.

“It’s their land, they can do what they like within the rules,” she told Magic Talk. “The Government, under me will never put a cent into Ihumātao. This is private land. This is a total nonsense and the Prime Minister was foolish to go and get herself involved in it in the first place.”

Collins’ predecessor Muller has also said Ardern should not have got involved.

“Our position with Ihumātao has been consistent all the way through: this was an issue, from our perspective, between the iwi owners and Fletchers,” he said in June.

Ardern last month rejected an “inaccurate” claim that a deal was imminent.

Multiple reports alleged a decision about the future of the south Auckland land was near with a resolution deadline of June 30, and that the Government was planning to acquire it under the Housing Act at a cost of $30 million.

“When we have an announcement to make we’ll obviously make it,” Ardern said at the time. “But it is fair to say that it’s been an issue that obviously we’ve worked on for some time and are still seeking to reach a conclusion.”

Deputy Prime Minister Winston Peters over the weekend shot down speculation of a deal.   “False. False,” Peters told TVNZ’s Q&A. “There is no such deal.”

Previous articleDon’t Piss off Trump
Next articleHave Your Say