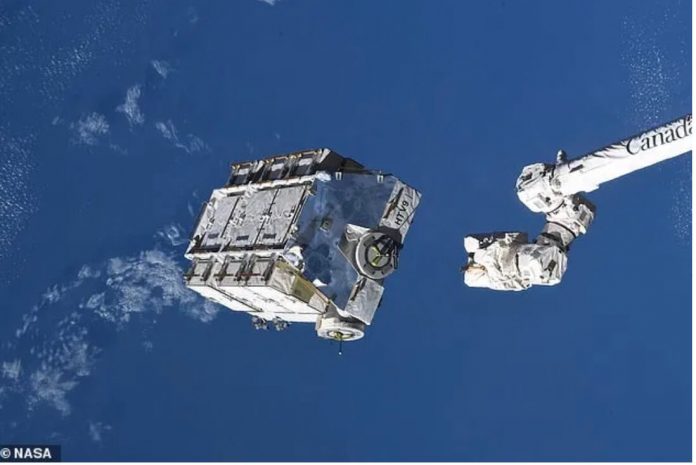 The most massive chunk of junk yet was just ejected from the International Space Station – though, don’t worry, the 2.9-ton crate containing old batteries shouldn’t be too much of a nuisance. It is expected to harmlessly burn up in Earth’s atmosphere two to four years from now.

Low-earth orbit is getting more and more crowded with litter that crash into each other, causing even more junk to pile up. In the worst case scenario, described by the Kessler syndrome, the collisions cascade, and it becomes too dangerous to launch future spacecraft from our planet.

So it may have been a cause for some concern when the space station’s ground control sent commands to the Canadarm, a robotic arm on the orbiting platform, to toss a 2,630kg pallet of obsolete batteries into the void last week. However, the move was harmless, NASA HQ assures us.

“This is a normal procedure,” a spokesperson told The Reg. “Items marked for disposal from station are typically packed inside departing cargo vehicles that burn up in the Earth’s atmosphere during reentry.

“There have been jettisons of external components from the station in the past. [For example], the debris shield we removed from [the Alpha Magnetic Spectrometer] during its repair [during extravehicular activities], several defunct antennas on Russian spacewalks. Every proposal for a jettison is carefully reviewed and submitted for approval by the international partners that operate the station.”

The package was flung from the ISS on March 11 at 1130 UTC, we’re told. It contained nine batteries that stored electrical energy gathered from the vehicle’s solar panels, and is the heftiest object to be ejected yet. The ISS is upgrading its battery system, and the old hardware has to be disposed of.

“The external pallet was the largest object – mass-wise – ever jettisoned from the International Space Station at 2.9 tons, more than twice the mass of the Early Ammonia Servicing System tank jettisoned by spacewalker Clay Anderson during the STS-118 mission in 2007,” the spokesperson added.

It won’t remain in low-Earth orbit forever. The pack’s orbit will decay bringing it closer to our atmosphere, where it will eventually burn up and be destroyed. Scientists estimate will happen in two to four years; in the meantime, its whereabouts will be tracked by ground control.

“Our ballistics officers indicate no threat to contacting other space objects, but this item, like all, will be tracked by the US Space Command,” NASA confirmed.

Dumping the pallet was not the original plan, as it was set to make a return trip aboard the Japanese H-II Transfer Vehicle, but it was left behind last year due to a failed 2018 Soyuz launch that disrupted spacewalk schedules.

Previous articleTHE GREAT RESET IS HERE
Next articleHave Your Say