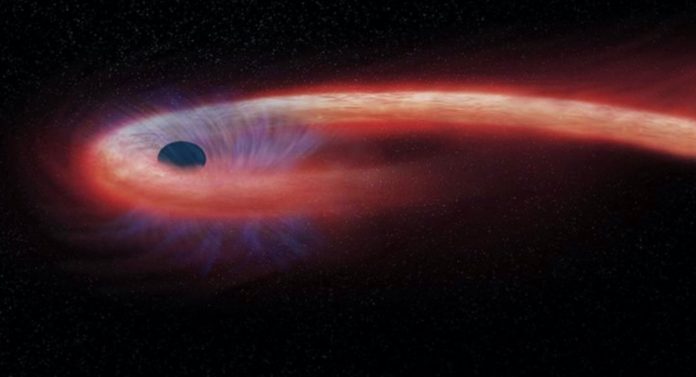 Astronomers and astrophysicists have released a movie of the M87 black hole that compresses years of data to show the exotic object’s “wobbling” movements.

In 2019, scientists stunned the world with the first-ever image of a black hole. They constructed the image using a global decentralized telescope array, the Event Horizon Telescope (EHT), which captured radio-frequency signals from the enormous black hole at the center of the M87 galaxy 55 million light-years away.

Because of the way its monstrous gravitational influence absorbs light, a black hole cannot directly be seen. But the resulting image – assembled using interferometry, and computational power equal to ten thousand laptops – gave humanity its first-ever visual glimpse of the shadow of a black hole’s accretion disk.

Now the team of radio astronomers and astrophysicists has released the next volume in their landmark work, a “movie” of the M87 black hole that compresses years of data to show an animation of the exotic object’s “wobbling” movements. The sequence of frames does not depict how the black hole itself moves but rather the turbulence of strong magnetic fields turbo-charging the surrounding hot gas and matter of the accretion disk.

“Because the flow of matter falling onto a black hole is turbulent, we can see that the ring wobbles with time,” says lead author Maciek Wielgus.

While it boggles the mind to imagine how scientists can capture such precise data from 55 million light-years away, it helps to remember that the telescope array technology they’re using has such powerful angular resolution it could “observe a billiard game being played on the Moon and not lose track of the score!”

As their data sets increase, scientists say analysis of M87 and other black holes will improve and their animations will become far more detailed.

“These early-EHT experiments provide us with a treasure trove of long-term observations that the current EHT, even with its remarkable imaging capability, cannot match,” said Shep Doeleman of EHT. “When we first measured the size of M87 in 2009, we couldn’t have foreseen that it would give us the first glimpse of black hole dynamics. If you want to see a black hole evolve over a decade, there is no substitute for having a decade of data.”

Such data will help test and further corroborate black hole predictions made by Einstein and Stephen Hawking. A campaign next year that uses shorter-wavelength radiation will augment the resolution of the team’s images and provide even better glimpses of the eerie black hole shadow.

Further interferometric study of black holes could yield information about their internal concentric photon rings, which scientists believe contain their own unique “movies” with information about the history of the cosmos. As we uncover truths about black holes – unquestionably the most exotic and mysterious object in the universe – they believe we will learn more about cosmology and physics.

Some scientists believe black holes hold the key to unlocking the answers to dark matter and possibly even uniting the fields of relativity and quantum mechanics.