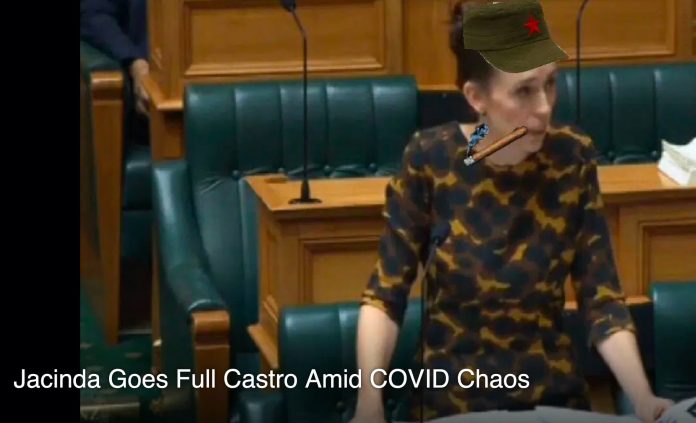 New Zealand Prime Minister Jacinda Ardern has apparently gone full Fidel Castro, as the harsh realities of trying to run a socialist dictatorship in a democratic nation make their way home to roost.

With those pesky opposition MPs and journalists beginning to ask too many questions, like “how will people pay for stuff without jobs?”, “when will we be allowed to have a haircut?”, and “was it really necessary to completely fxxk the entire country?”, Jacinda has had about enough of representative democracy and accountability, deciding instead life would be a lot easier if people just shut up and did what they’re told. And smiled. And hugged.

“Yeah look, she’s just a bit over the whole having to explain herself to people thing.” a spokesperson for the Ministry of Propaganda & Loyalty told The Waterton Chronicle.

“She doesn’t see why she has to put up with people questioning her all the time. She’d much prefer if they’d all just leave her alone to be honest.”.

This reporter tried to speak to an actual government MP for comment but was told El Presidente has issued an edict banning anyone from speaking to the media.

“Sorry, you’ll have to wait for El Presidente. It’s just better for us if she does it.”.

Deputy Prime Minister Winston Peters apparently tried to remind Jacinda what country she’s running, but was quietly whisked away by First Dad Clarke and a bunch of loyalists before he had a chance.