You Stupid Boy
Home US Politics Talk About Media Bias 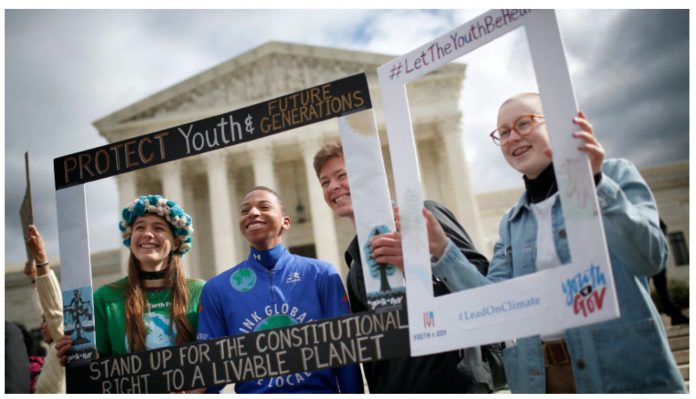 Reading the headline, one would think this was a court action against Trump.

On Friday, the Ninth Circuit Court of Appeals ruled to kill the landmark case where youth were suing the U.S. government for taking insufficient action on climate change.

Up until this point, the lawsuit had seen some hopeful wins. However, the three-judge panel “reluctantly concluded that the plaintiffs’ case must be made to the political branches or to the electorate at large,” the official 64-page ruling reads. While the court acknowledged that the government has long understood what’s causing climate change and what it’ll lead to, the judges ruled that this type of request is beyond what the courts can properly handle. This requires policy decisions that sit within the expertise of the executive and legislative branches, not the judicial.

This lawsuit stretches back to 2015 when 21 youth first filed a lawsuit known as Juliana v. United States against then-President Barack Obama and the federal government alleging that the government had “violated the youngest generation’s constitutional rights to life, liberty, and property.” Though the presidency has since changed hands and Trump is named in the current iteration of the case, the argument remains the same.

The case hinges on the reality that the government knows climate change is happening, and yet it is doing very little to prevent the crisis from reaching a boiling point where the planet becomes uninhabitable for future generations. Letting the climate reach that point would, the plaintiffs’ argued, infringe on their basic Constitutional rights to life.

Despite the obvious fact that climate change will (and already is) killing people and making them sick, the court found otherwise. Judge Josephine Staton in her dissent seemed to be the only one who got it. In her dissent, she wrote (emphasis added):

“In these proceedings, the government accepts as fact that the United States has reached a tipping point crying out for a concerted response—yet presses ahead toward calamity. It is as if an asteroid were barreling toward Earth and the government decided to shut down our only defences.

“Seeking to quash this suit, the government bluntly insists that it has the absolute and unreviewable power to destroy the Nation.”

The other judges are clear in the opinion that they agree with Staton that the other political branches of the U.S. have ignored the public’s pleas to take action on climate change. However, they don’t believe that the law allows the courts to exert that kind of pressure on the government. As Judge Andrew Hurwitz wrote in the majority opinion, “Not every problem posing a threat—even a clear and present danger—to the American Experiment can be solved by federal judges.”

This is an unfortunate turn of events. Our Children’s Trust confirmed they won’t stop here. They plan to ask the full Ninth Circuit to review this decision. Senior attorney Andrea Rodgers told Earther in an email:

“To say that an Article III court can’t say when a constitutional right has been violated is unprecedented and contrary to American principles of justice. We will be asking the full Ninth Circuit to review the determination that federal courts can do nothing to address an admitted constitutional violation. That appeal will be filed in the coming weeks.”

This isn’t the only major climate case, though. Swedish activist Greta Thunberg filed an international petition against five governments last year alongside 15 other children. And Dutch courts recently granted a major victory in a climate case that could affect other cases around the world (though, it appears, sadly not this one).

The battle is far from over. If the youth can’t win in court, you best believe they’ll keep taking to the street.