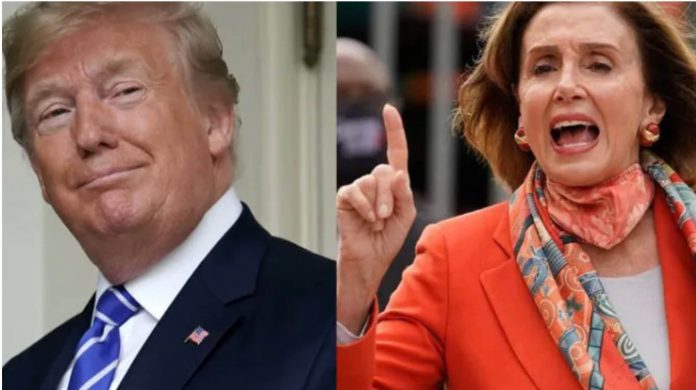 House Democrats have introduced a new bill that will permanently ban former President Trump from having his name displayed on federal projects, buildings, statues, lands, or any other type of commemoration.

According to the bill’s text, the legislation would “prohibit the use of Federal funds for the commemoration of certain former Presidents.”

While Trump is not specifically mentioned by name in the bill, he is the only president to have been impeached twice.

The bill, named the “No Glory for Hate Act,” was introduced by Trump-hating California Democrat Rep. Linda Sanchez and has 13 cosponsors, all of whom are unsurprisingly Democrats.

“For years, Donald Trump poured gasoline on lies, encouraging racism and hatred, then lit the match on January 6th,” Sanchez said in a statement last month.

“A president who has been impeached twice does not deserve the honours bestowed on a former president,” Sanchez continued.

“We should never glorify the hatred Donald Trump personified as President. This bill ensures that there is no glory for hate, not a building, statue, or even a park bench.”

Breitbart.com reports: The bill specifically prevents federal funds from being used to “create or display any symbol, monument, or statue commemorating any former President that has been twice impeached by the House of Representatives,” including “any highway, park, subway, Federal building, military installation, street, or other Federal property.”

The bill also prevents Trump from being buried at Arlington National Cemetery.

In addition, the bill states that twice impeached presidents are “not entitled to receive any benefit, other than Secret Service protection, under such Act.” It also states:

No Federal funds or other Federal financial assistance may be provided to a state, political subdivision thereof, or entity if any such funds or financial assistance will be used for the benefit of any building, land, structure, installation, or any other property that bears the name, or is named or designated in commemoration of, any former President that has been twice impeached by the House of Representatives.

Sanchez recalled the events that unfolded inside the Capitol on January 6 and insisted that students should not attend a school named “in honor of a traitorous president”:

I remember getting the horrifying news that no one was coming to help us, that the National Guard had not gotten approval, while police officers were being beaten and overrun. I thought, no one who stirs up this seditionist act should ever be held to the same high standards we hold for our former presidents who served with grace. Even though Trump is no longer in office, he should still be held accountable for his actions and the taxpayers should not foot the bill for his future actions. I can’t imagine sending students in Southern California, or anywhere in America, to a school named in honour of a traitorous president.

Can you imagine the outrage if, when all this covid, great reset and all the other shit Liarbour are putting us through, someone tried to do the same to Saint Cindy?

There would be so much outrage, they could harness all the wasted energy, and do away with wind farms for years.