You Stupid Boy
Home World News Tell the UN to get stuffed.

Tell the UN to get stuffed. 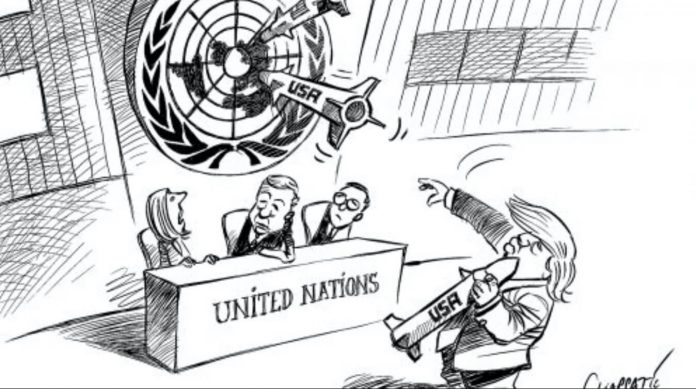 U.N. Secretary General Antonio Guterres on Monday called for “improved world governance” as one solution to constant geopolitical upheaval, with the globalist body central to his appeal for the revival of multilateralism.

The Por­tuguese socialist spoke as the U.N. marks its 75th anniversary and the coronavirus pandemic continues its deadly toll.

He has a long history of being a hardcore communist.

AP reports Guterres said, “Today, we have a surplus of multilateral challenges and a deficit of multilateral solutions” before pointing to coronavirus and saying it has “laid bare the world’s fragilities,” which can only be addressed together.

“Climate calamity looms, biodiversity is collapsing, poverty is rising, hatred is spreading, geopolitical tensions are escalating, nuclear weapons remain on hair-trigger alert,” Guterres conceded, without specifically adding just what the U.N. has done to alleviate those problems – if anything.

Emphasizing instead the need for a new “multilateral society,” Guterres said,“no one wants a world government — but we must work together to improve world governance.”

This is not the first time Guterres has sought to garner support for more power.

In June he said the world needs an overarching level of multilateral governance that can sideline problematic “national interests,” as he lamented existing U.N. instruments such as the Security Council have teeth but “show little or no appetite to bite.”

In response to questions as to exactly what the U.N. has achieved over three-quarters of a century, Guterres said, “at least the Third World War so many people have predicted was avoided.

“We had what many called the ‘long peace’ with many small conflicts, but conflicts in which the big powers did not get involved against each other.”

Now the future must be addressed. To that end U.S. President Donald Trump and China’s President Xi Jinping are scheduled to address the U.N. General Assembly on Tuesday.

The body marked its actual 75th anniversary — the charter’s signing in San Francisco on June 26, 1945 — at a scaled-down event Monday with the rest of the week due to be taken up by representatives sending video messages to the organization.

Monday’s mainly virtual official commemoration was a less than stellar assessment of the state of the world, the impact of the 193-member world body over seven decades and the struggles ahead.

Some leaders appeared in native dress and in unusual settings, adding some color to prerecorded speeches.

The commemoration was finally suspended with 58 countries waiting to speak, primarily because many leaders spoke far longer than the three minutes they were allotted.

No date has been set for the speaking to resume.

He’s calling for Communism and more totalitarianism.
If you look at all the top people in the UN they are all Communist.

Trump is the only hope we have to stop this shit. Kick the UN out of New York and stop funding it.

Previous articleNot a priority at last. Can we have more like this please.
Next articleHave Your Say