You Stupid Boy
Home Chinese Virus Terror Against the Unvaxxed

Terror Against the Unvaxxed 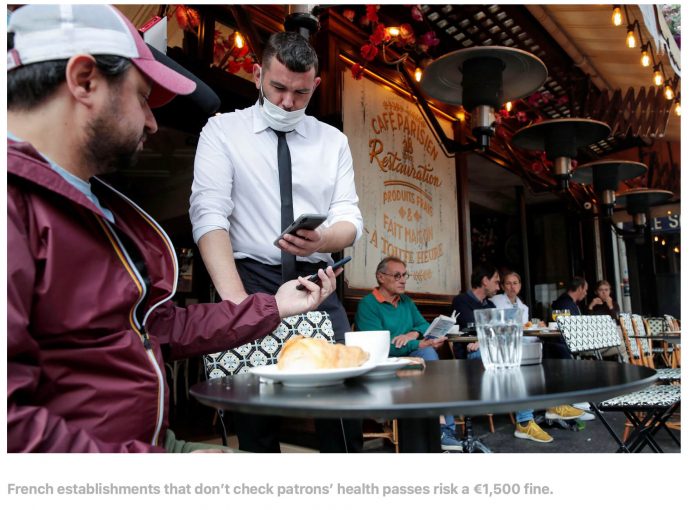 .Digital health passes show if a person is vaccinated, has recovered from Covid-19, or has freshly tested negative for the virus

PARIS—Julien Zerbos turned away some would-be diners on Monday from the brasserie on Paris’s Champs-Élysées where he works because they didn’t have the European Union’s new digital health certificate.

France began requiring the passes, which certify that somebody has been vaccinated against Covid-19, on Monday for people seeking to dine at a restaurant, whether indoors or outdoors. The pass is now also necessary to take domestic flights and long-distance buses and trains. France already made the pass mandatory last month for a host of other activities such as entrance to museums, pools, gyms and large sports events.

“Some customers say they got the vaccine but didn’t come with the health pass, and we have to say sorry, we cannot accept you,” said Mr. Zerbos, who works as a host at Fouquet’s in Paris. “We can get in serious trouble if we accept someone without the health pass.” 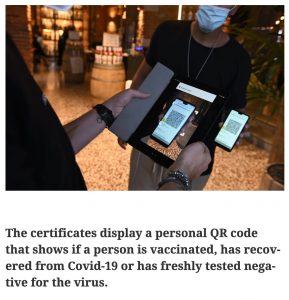 French establishments that don’t check the health passes risk a €1,500 fine, the equivalent of about $1,763, which can rise to €9,000 and a year in prison following the third violation within a month.

Italy also made the digital health pass mandatory for a range of activities last Friday, although the unvaccinated can still dine at restaurants if they sit outdoors.

The certificates, known as the green pass in Italy and health pass in France, display a personal QR code that shows if a person is vaccinated, has recovered from Covid-19, or has freshly tested negative for the virus.

Italian restaurant and bar owners risk a fine of up to €1,000 if they don’t enforce the green-pass requirement, and can be forced to close for up to 10 days if they are caught three times in three different days.

In both countries, patrons breaking the rules can also be fined.

France and Italy are at the forefront of a European trend toward rules that effectively separate populations into the vaccinated and the unvaccinated, and that make the resumption of normal daily life easier for the former. Governments are hoping that the new rules will push more people to get vaccinated and tamp down the spread of the highly contagious Delta variant, preventing a return to lockdowns later this year.

In the U.S., some cities and states have begun imposing similar restrictions as they try to coexist with the virus. New York City will require proof of vaccination for customers and workers at restaurants and gyms next week, although inspections and enforcement won’t begin until September.

The EU’s digital certificates have existed since July 1, but most governments have only begun making them mandatory recently for activities other than cross-border travel. The rules differ across the continent and sometimes within countries.

In Germany, health-pass requirements vary from region to region based on local infection rates. In Berlin, for example, proof of vaccination, immunity or a recent negative test is needed to dine indoors or go to the gym.

For Americans traveling to Paris, tourist sites such as the Louvre museum and the palace of Versailles have been also accepting the vaccine cards issued by the Centers for Disease Control and Prevention. American tourists can also use their U.S. cards to apply online for a QR code that works in France. Bars and restaurants in Italy have also been accepting the CDC cards.

Rising restrictions on the unvaccinated have sparked only small protests in Italy, but in France, protesters took to the streets on Saturday for the fourth consecutive weekend. More than 237,000 protesters marched in cities across France, including Paris, Lille and Nice, according to estimates from France’s interior ministry.

The new requirements have led to a boom in vaccinations in both France and Italy, boosting vaccination campaigns that had shown signs of slowing. In the three days after France’s government announced people would need the health pass to go to a restaurant, more than three million people made a reservation for a first vaccine jab.

The two countries have given at least one vaccine dose to about 65% of their total populations, according to Our World in Data, compared with about 58% in the U.S.

At La Tourelle, a bistro in St. Mandé, east of Paris, the number of people who came on Monday morning was down around 80% from a week earlier, said manager Noé Rodrigues, something he attributed to the new rules. Of those who did come, around half were turned away, some of whom had only the first vaccine shot.

“We’re here to provide pleasure, and the first thing we do when a client sits down is ask to check their health pass. That bothers me a little,” said Mr. Rodrigues.

With most of Italy enjoying balmy weather, the new rules haven’t dented business for restaurants and bars since the majority of diners were already opting to sit outdoors, where a green pass isn’t required.

“As long as the weather holds, having the green pass isn’t much of an issue at the moment because people want to be outside,” said Andrea Linguanti, who owns two restaurants along a canal in Milan’s Navigli neighborhood, a popular spot for both locals and tourists. “Crunchtime will be in September and especially October when it starts getting colder and the rain comes.”

On Saturday night, all the outside tables at his two restaurants were taken. A few groups sat inside after showing their certificates, he said.

In a nod to the importance Italians place in being able to knock back an espresso or cappuccino while standing inside at a cafe, that can still be done without proof of vaccination if the customer doesn’t linger. The certificate, which is issued in Italy after the first vaccine dose, will be required on flights and long-distance trains and buses from Sept. 1.

Matteo Minguzzi, a hotel employee in Milan, spent Saturday night drinking with friends along the canals. One venue had no space outside so they sat inside after showing their QR codes.

“I’m not convinced that requiring vaccination is the best policy,” said Mr. Minguzzi, 33. “I know people who signed up to get vaccinated after the new restrictions were announced, but stigmatizing people who are still trying to figure out if they want to be vaccinated might backfire.”

At most restaurants, bars and other venues where similar rules apply, such as museums, staff use a smartphone or other device to check people’s QR codes.