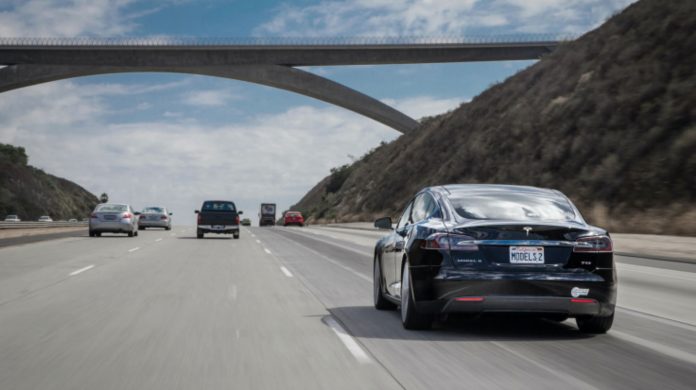 Police have filed charges against a Tesla driver who they pulled over driving at 93 miles per hour while he was asleep at the wheel.

Police in Canada have filed charges against a Tesla driver who they pulled over driving at 93 miles per hour while he was asleep at the wheel of his car and the seat was pulled down like a bed.

Officers with the Royal Canadian Mounted Police were notified that a vehicle was speeding down Highway 2 near Ponoka at about 4 p.m. on Thursday, July 9.

“Sure enough, a short time later the Tesla goes by. The officer was sitting in the center median and he too was like, ‘Noooo,’” Alberta RCMP Sgt. Darrin Turnbull said.

The vehicle was a 2019 Tesla Model S that appeared to be propelling itself at a speed of over 86 mph (140 km/h) with “both seats completely reclined” and “both occupants appearing to be asleep,” reports Canada’s Global News.

The officer began his pursuit of the car with sirens blaring and lights flashing in an attempt to halt the car, which instead began slightly accelerating.

“The officer was able to obtain radar readings on the vehicle, confirming that it had automatically accelerated up to exactly 150 km/h (93 mph),” RCMP said.

Eventually, the driver woke from his slumber and prevented the high-speed chase from continuing.

“He gets up closer to the vehicle and hits the siren, and it’s at that point he can see the driver pop up and pull over,” Sgt. Turnbull added.

The motorist, a 21-year-old male from British Colombia, was charged with speeding and driving while fatigued, resulting in his license being automatically suspended for 24 hours. He was later charged with dangerous driving.

“The decision was made that, no, this is a marked departure from the norm,” Turnbull said.

While the 2019 Tesla didn’t appear to be outfitted with the company’s autopilot feature, many of Tesla’s vehicles come equipped with relatively advanced driver-assist programs.

Tesla is one of a growing number of companies that have sought to rethink transportation and further develop self-driving and autonomous vehicle services. The extension of an unmanned or automated model to commercial delivery services, for example, would drastically boost profitability and reduce labor costs by eliminating human drivers in favor of a driverless model.

While not entirely intended to enable driverless transportation, the “Autopilot” system touted by Tesla offers a suite of advanced driver assistance features including lane centering and semi-automated highway navigation. The Level 2 partially autonomous system also includes adaptive cruise control, lane keep assist, self-parking, as well as the ability to automatically change lanes. Tesla Autopilot-enabled cars use a variety of sensors, up to eight cameras, radar and ultrasonic to automate these tasks.

While these impressive features efficiently reduce the amount of input required by human motorists, drivers are still expected to remain engaged with the vehicle to ensure its safe operation.

However, over the past years traffic investigators have found that the Autopilot system contributed to fatal crashes, resulting in lawsuits against Tesla for wrongful death.

In one case, a Tesla driver in Los Angeles was found to be eating and drinking coffee immediately before crashing his Tesla Model S into a fire truck. Another Tesla driver in North Carolina was enjoying a movie on his phone when his car narrowly avoided crashing into one police cruiser before slamming into two more, while still another Tesla motorist was entertaining himself with a videogame before dying in a fatal crash.

Tesla CEO Elon Musk has blamed the crashes on drivers being overconfident and complacent and, essentially, failing to read the fine print of the “Autopilot” system. Critics, however, charge the tech tycoon with encouraging driver inattention by touting the system as mostly automated.

While there haven’t been any similar incidents involving self-driving cars in Canada, pilot programs for autonomous cars have been introduced in Ontario and Quebec, with the requirement that “safety drivers” are always on hand to wrest control of the vehicle to prevent a tragedy.

The motorist must appear before court in December.

“Although manufacturers of new vehicles have built in safeguards to prevent drivers from taking advantage of the new safety systems in vehicles, those systems are just that — supplemental safety systems,” Alberta RCMP Traffic Services Superintendent Gary Graham said in a statement. “They are not self-driving systems, they still come with the responsibility of driving.”

Previous articleCindy will be pissed.
Next articleNo lockdown in Sweden