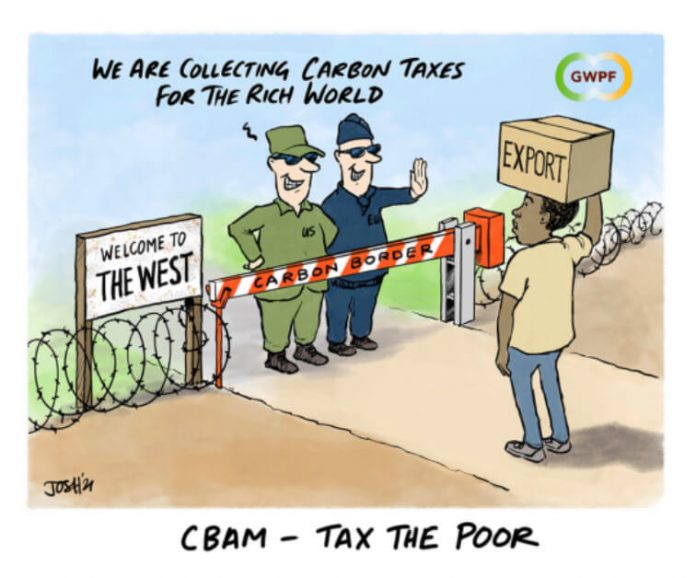 Rise Of The Climate Protectionists

Western politicians have failed to persuade their own voters to commit economic suicide by banning fossil fuels–and forget about China, Russia, or India.

The climate lobby’s fallback, which is starting to emerge, is to punish the foreigners and their own consumers with climate tariffs.

Bureaucrats at the European Commission are due to unveil the proposed Carbon Border Adjustment Mechanism (CBAM) later this month, but a draft recently leaked.

Brussels wants to impose tariffs to bring the cost of carbon dioxide emissions tied to an imported good into line with what a European producer would pay to produce the same good.

This is an admission that the European Union’s emissions trading scheme (ETS) is bad for the economy. European companies are less competitive because they have to pay for their emissions and foreign companies don’t.

Environmentalists say the ETS encourages companies to send production offshore to avoid the ETS, which greens call “carbon leakage” and most people would call common sense. The CBAM is intended to level the playing field, at least within the European market.

Even on those terms, the draft plan is a failure. It starts small, applying at first to a handful of industries such as iron, steel, and fertilizers. And it doesn’t account fully for environmental compliance costs.

The CBAM will be tied to the cost of tradable emissions permits, but it won’t factor in the expenses European companies bear for a complex web of green subsidies, feed-in tariffs, and the like that increase energy costs at factories.

The bigger problems are that a carbon tariff would impose an enormous burden on companies seeking to sell to the EU—even the low-emitting firms—and as a result, probably will trigger a trade war.

Under the leaked plan, foreign firms would have to undertake detailed carbon audits to report emissions to EU regulators and then would have to work out what proportion of the emissions attributable to goods shipped to the EU already were covered by carbon taxes elsewhere.

If a company isn’t able to complete such complex and expensive calculations, its carbon tariff will be estimated on the basis of the emissions of the dirtiest 10% of European producers for the same good.

The choice between costly compliance or a punitive default tariff risks deterring smaller foreign companies from trying to navigate this system. That’s a point the EU’s trading partners are sure to raise when this inevitably lands at the World Trade Organization.

WTO rules allow for some climate-related tariffs, but trade lawyers will spend years sorting out whether the EU’s plan complies with WTO principles.

At a minimum, the EU probably will have to scrap its subsidies for high-emission industries, such as generous allocations of free credits under the current ETS. We’d love to be a fly on the wall when someone in Brussels sits down to explain this to industry leaders.

Nor are WTO rules likely to allow another favor European companies might request, a refund of ETS charges for exported goods in order to restore European competitiveness abroad.

The carbon-tariff plan may be intended to goad the Biden Administration into imposing a carbon tax that would burden U.S. businesses with the same climate costs as Europe’s.

The list of targeted industries appears calculated to minimize the effect on trade with the U.S., but the threat of expansion to cover more goods is serious.

John Kerry, President Biden’s climate envoy, has said the Administration is evaluating a climate border tax. And the political temptation to please climate greens and protectionist unions with tariffs, especially toward China, will grow.

The climate tariff is a tacit admission that Western elites haven’t convinced their voters to pay the price of their climate obsessions.

Like Donald Trump, they now want to blame foreigners. In the process, they’ll force their consumers to pay more for imports and domestic goods, and they’ll harm their own exporters if countries retaliate.

The last thing the world economy needs as it recovers from a pandemic is a climate-change trade war.