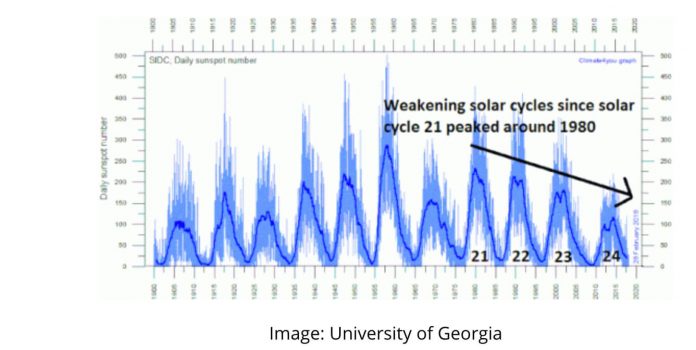 The coming Grand Solar Minimum, is something that will have much more impact on the environment than anything we puny humans can do. It generated a lot of interest from all sides, so it’s time to delve deeper into what we can expect. Starting with the hype: During the last grand solar minimum (GSM), the Maunder Minimum of 1645 to 1715, glaciers advanced, rivers froze, sea ice expanded — in short, the Little Ice Age. Is another one is almost upon us?

Probably not. Maunder occurred at the tail end of a bi-millennial cycle. These cycles range between 2,000 and 2,600 years in length and see the Earth first warm, then cool. Gradual cooling had been going on for hundreds of years. Maunder just capped it off. Today we are a few hundred years into the warming phase of the subsequent bi-millennial cycle. Different starting conditions yield different paths.

The progressives say that we’re so deep into anthropogenically accelerated climate change (AACC) that there’s almost no time left to turn things around. If we don’t act now, it will be too late.

Nope, sorry squad members. What we can predict, instead, is an overall temperature reduction of 1 degree Centigrade by the end of the GSM. Afterward, natural warming at the rate of around 0.5 C. every hundred years will continue for the next 600 years or so.

That gives us a good 35 to 50 years to hone the science and come up with the best ways to mitigate the impact of unstoppable global warming on humankind; until, that is, it naturally reverses. See suggestions below for better uses of funding currently earmarked to address the “climate crisis.”

Reasonably speaking: We’ve been warming, so the cooling of the GSM will just even us out for a while. Therefore, nothing to worry about, right?

Well, not quite. There are a few worries. Plants grow in response to warmth, moisture, nutrients, and most importantly sunlight. Even if the temperature does not plunge to glacial depths, some cooling will take place and clouds are expected to grow denser and cover much of the earth’s surface as this GSM bottoms out. If normally-correlating volcanism takes place, the additional material in the atmosphere will further darken the globe and provide even more opportunity for condensation and cloud formation.

Last year, Dr. Valentina Zharkova wrote “This global cooling during the upcoming grand solar minimum…would require inter-government efforts to tackle problems with heat and food supplies for the whole population of the Earth” (not to mention their livestock).

A decrease in solar ultraviolet radiation can be expected to slow the formation of ozone in the atmosphere, a lack of which tends to destabilize the jet stream, causing wilder weather. Wind generators turn off when the wind is excessively strong. As we now know, they are not immune from freezing in place.

In the face of a greater demand for power, we will generate less.

Even worse is this: Historically, GSMs have been associated with extreme weather events. Floods, droughts, heavy snowfall, late springs, and early autumns have all resulted in famine. Famine during GSMs has led to starvation and societal upheaval. No one wants the former, and I think we’ve seen enough of the latter this past year or so to do for our lifetimes.

We’re about 16 months into this GSM, with 32 more years to go. Already 2019 and 2020 saw record low numbers of sunspots. We’ve had lower than expected crop harvests due to unseasonable rains both years. The April 2021 USDA World Agricultural Product report has articles detailing Taiwan’s expected 20% decrease in rice production this year over last, Cuba’s rice production 15% below its five-year average, Argentina’s corn, Australia’s cotton, Malaysia’s palm oil — all down, all due primarily to the weather. There are some expected bumper crops, all based on expanded acreage.

We’ve got seven years until we hit the trough. There’s no time to lose. Fortunately, We the People are amazing. We’re strong, courageous, resilient, smart, well-educated, and clever. We are capable of coming together for a common cause and working well together regardless of politics and other differences. We must pull together to make sure we all survive the coming tumult. Here’s what we do.

On the federal level, take the brakes off energy production. No more talk of closing power plants, especially coal-fired ones, or of removing hydroelectric dams. Reinstate the Keystone XL pipeline; we’re going to need that fuel available to us when the predictable contraction of the global fuel market occurs. Extend the tax credits for those who install solar power. Production may not be optimal during the GSM, but as much as can occur will take a load off commercial energy.

At the United Nations, Ambassador Thomas-Greenfield should prioritize preparations for the coming dark, cold years. It is in the world’s best interest that all nations cease aggressions, even if just for a decade or so, so that we all may turn our resources to securing the lives of our peoples.

The USDA should not just take the brakes off agricultural production; it should encourage all producers to ramp it up. We need to have enough on hand to address the expected shortfall between production and requirement for at least five years. All loans to all farmers should be forgiven if they will agree to get on board with maximizing production. Garden seed producers, along with all other producers and processors, should be given significant tax credits for ramping up their production too.

Commerce should support vastly expanded food processing for long-term storage. Congress should fund the acquisition and storage of surplus staples and other food commodities so that sufficient amounts are on hand to keep our markets, feeding programs, and food banks operating when crop after crop begins to fail. Stockpiling for our future should take precedence over exports.

The NSC should demand a reconstitution of our strategic grain reserve, and that we prepare not just for ourselves, but to be able to share with needy neighbors and allies to keep America secure.

State, local, and tribal governments should clear away barriers to gardening and small animal production, including not limiting water catchment for gardening. Everything folks can do for themselves will take pressure off public services and limited markets. Local Emergency Services operations should also look at acquiring stocks of staples to help support their residents, as was done in many places last year.

Individuals, as well as schools and other institutions, should begin to garden, even if it’s just pots in a window. It’s a skill that takes time to learn and practice. Everyone should begin to preserve food for the hard times coming – freezing, canning, drying, smoking, pickling. As much as we can do for ourselves, we won’t be looking for someone else to have done for us.

This is really most important. We need to act now while food production is still relatively normal. Later on, if there’s nothing to buy, it won’t matter how much money we have on hand, as individuals or as a nation.