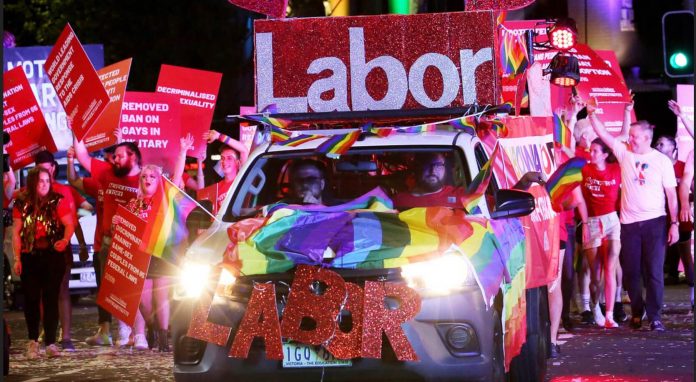 Private research commissioned by the NSW Electrical Trades Union — which was itself just taken over by the Left this week — has found a quarter of union members surveyed no longer vote Labor and a further 35 per cent reported decreasing support for the party. …

The document … confirms what many in the party have been quietly warning about for years — that among blue-collar voters Labor is perceived as elitist and out of touch, pandering to inner-city interests that drive their traditional base away. …

The workers wanted Labor to fight harder for their workplace rights — better wages, job security, quality control and the right to strike — but even more so to fight for their jobs instead of arguing about climate change and other ideological preoccupations.

One participant said, “I feel betrayed or cheated by the Labor Party. They’ve made a big push for carbon neutrality, catering to leftists in inner city Melbourne or Sydney. F**k you, we’ll vote Pauline Hanson or Clive Palmer.” …

The research found Labor MPs were seen to be a different class of person to the workers interviewed. “It’s like talking to aliens,” one said. They “meet at flash inner city pubs, not in Port Kembla”, are “not from the shop floor”, are “white-collar, university-educated yuppies” and “don’t believe in the same stuff I do … they’re diametrically opposed”.

Labor was also seen as being at odds with people of faith.

“I’m a Christian … I agree with them on the working conditions stuff, but disagree with the identity politics stuff,” one participant said.

Workers also felt it was bad politics for Labor to be “dragged” into “all the culture war s**t”.

I’m wearing my not-very-surprised face. The left everywhere in the West is becoming the party of the rich and those with financial connections to big government (often the same thing). The deplorables, the poor, the realists, and the less educated are all being increasingly excluded from politics, on the  excuse that we are morally deficient for not being up on the latest woke trends in “race”, “sex”, etc.

Previous articleDems In Crisis?
Next articleHave Your Say