The Deconstruction of a Fire 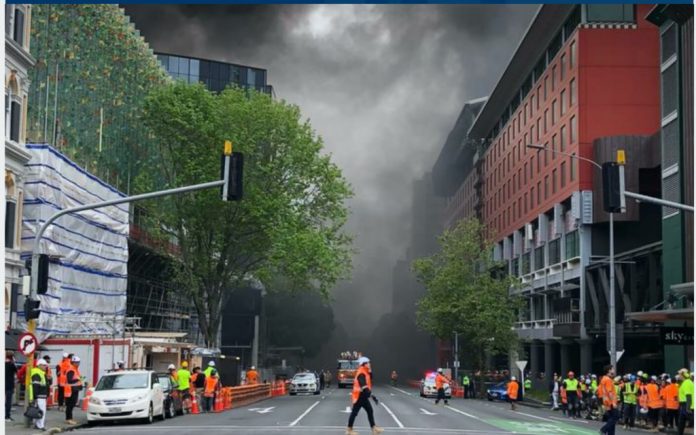 I received this from my insurance broker.

At 1:15pm, Tuesday 22nd October a fire broke out on the roof of the New Zealand International Convention Centre in Auckland. Close to 100  construction workers were on site at the time.

–          Large scale disruption for over 48hours forcing areas of the central business district to be shut down, in part by the smoke that was deemed toxic.

–          Media organisations including TVNZ were impacted by building evacuations and street closures, leading to disruptions in national broadcasts and programming.

–          A public health alert was issued by the Auckland Regional Public Health Service advising residents to stay away from the smoke where possible.

–          Contaminated water that had collected in the basement of the building was pumped out into the Viaduct Harbour.

–          Reports indicated there were approximately 100 vehicles submerged in water in the basement carpark.

–          Auckland Council issued a safety warning to residents as toxicology tests were being conducted to determine if the water posed a threat to human health or sealife.

–          By the Tuesday evening, it had been classified as a “sixth-alarm”, the highest category of response for an urban fire in New Zealand.

By Friday 25th October, the fire was out, leading to the next phase – dealing with the physical and financial impact for businesses and individuals.

Important Learnings you can take from this event.

► Liability. You can never be absolutely sure something won’t happen. It does despite the best procedures and systems. You can minimise your financial risk with appropriate liability cover. This also demonstrates that $1m isn’t anywhere near enough cover these days!

► Business & Personal Assets – your items can be affected by events that don’t even take place in your own property! Fire damage, smoke damage and water damage can all be covered by your insurance policy

► Business interruption / loss of access.  Just because an event hasn’t damaged your premises, this doesn’t mean you won’t be affected. Losing business because access to your premises is restricted is a real risk and happens more often than you might think.

► Motor Insurance. We hope the vehicles parked in the basement of the Sky City complex were insured because they’ll all be considered write-off’s due to being submerged in water for the duration of the fire.  The electrics, mechanics and interiors will all be well beyond repair.  Comprehensive Insurance will cover this, but if you only held Third Party cover you’d likely find your loss isn’t insured.

So what about the Convention Centre itself?

There is likely a Contract Works policy in place, which covers property during construction.

► The policy can pay to repair or redo the work in progress if it’s damaged by an insured event, including the costs of demolition.

► Contract Works should be arranged any time you are considering renovating or extending or building from scratch.

Previous articleThe Prince Of Lies
Next articleHave Your Say