You Stupid Boy
Home US Politics The Internet NEVER forgets 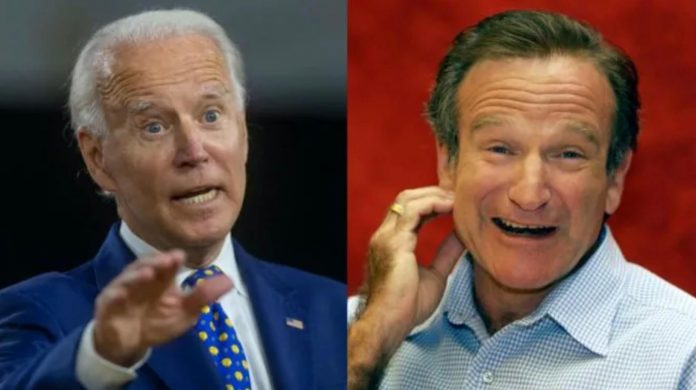 In a resurfaced clip from a 2009 HBO special, the late great Robin Williams mocked Joe Biden as “ramblin’ Joe Biden” who “says sh*t that even people with Tourette’s go, ‘No, no! What is going on?’ ” proving that the then-vice president’s has always had a talent for putting his foot in his mouth.

Robin Williams said that Joe Biden always provides a steady source of comedy. “There’s always ramblin’ Joe Biden. What the f***?,” said Williams in the clip. “Joe says shit that even people with Tourette’s go, ‘No, no! What is going on?’ ”

Williams continued: “Joe is like your uncle who’s on a new drug and hasn’t got the dosage right. ‘I’m proud to work with Barack America.’ ‘He’s not a superhero, you idiot — come here!’ ‘When FDR was on television –‘ ‘There was no TV back then. Come here Joe, sit down.‘”

Breitbart report: The clip comes from the 2009 HBO special Weapons of Self-Destruction, featuring Williams performing in front of a live audience in Washington, D.C.

“While we’re ‘reminiscing’ (to further your political agenda), you should look up what he said about your Dad. I did. Promise you, it’s much more ‘savage’. Gentle reminder that the dead can’t vote, but the living can,” she tweeted.

Biden, 77, has faced speculation that he is experiencing cognitive decline due to his numerous verbal mishaps and outbursts while on the presidential campaign trail.

The presumptive Democratic nominee implied last week that the black community is a homogenous group that thinks alike in an interview with minority journalism groups.

“Unlike the African American community, with notable exceptions, the Latino community is an incredibly diverse community,” Biden said.

In one of his most notorious outbursts, Biden told a Michigan auto worker in March that he was “full of shit” and then proceeded to berate the factory worker.