You Stupid Boy
Home US Politics The not so silent majority

The not so silent majority 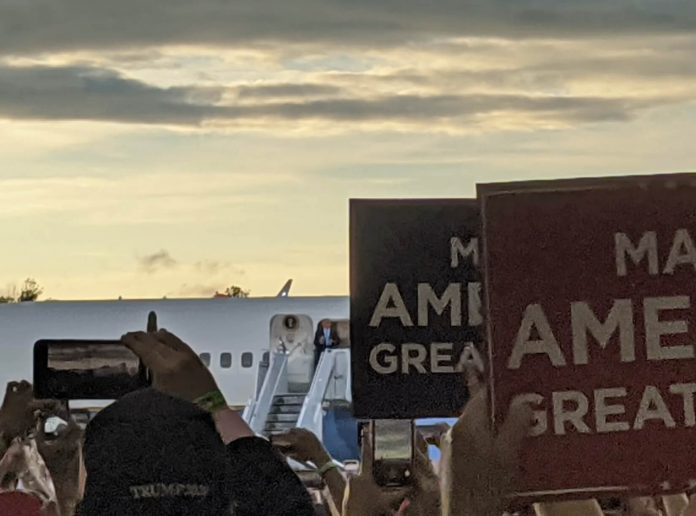 US Politics
Share
Facebook
Twitter
Pinterest
WhatsApp
The county paper predicted a crowd of 2,000-plus for President Donald Trump’s 7 p.m. hangar stop. There are more than twice that many vehicles in the parking lots and fields by 4.
By Christopher Bedford

LATROBE, Penn. — There are three roads to Arnold Palmer Regional Airport. The traffic jam stretches 1.5 miles into Unity Township, out a mile toward the country club, and eight miles toward Pittsburgh. Parking by a mailbox and hoping we don’t get towed, we hustle past as the red flag-waving line of packed cars, trucks, station wagons and occasional motorcycles creeps slowly onward toward this evening’s festivities.

The county paper predicted a crowd of 2,000-plus for President Donald Trump’s 7 p.m. hangar stop. There are more than twice that many vehicles in the parking lots and fields by 4, with some camping out overnight and miles more on their way, slowly passing the Trump signs that decorate every other yard. The president won this state by a paper-thin 44,000 votes four years ago, and polls show a razor-tight race. 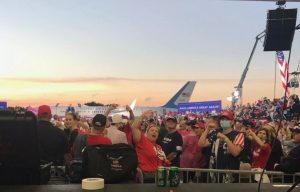 Rolling Rock drinkers might recognize the town of Latrobe from the cold, green bottles they knock back, but the plant closed in 2006 amid stalling sales talks, eventually moving far away.

Latrobe Brewing had called this city home since 1939 — and left generations of employees behind for the few hard years ahead. “Every bar had Rolling Rock on tap,” the bartender at Touchdown Club tells us. “Everybody boycotted it. Just this year people started drinking it again.”

Stacie Molina, a young-looking 36, tends bar at “the club.” Founded in ’47, it was private for years, and the hand-written membership cards of Steelers legend Terry Bradshaw, founder Art Rooney, owner Art Rooney II, and hometown hero “Mr. Rogers” are framed on the wall. This town has hosted football teams for 125 years, and the Steelers’ training camp is just by the airport.

The old-timers enjoyed old-time steakhouse cocktails like the grasshopper until the last one passed just a few weeks before our visit. “If you sat in one of their seats, they’d just stand there and look at you until you moved,” Stacie laughs. I order a longneck Rolling Rock after assurances I won’t upset any of the mid-afternoon drinkers.

Young and old, men and women, politicos and locals are packing in as we make the near-mile trek from the roadside gravel we hope won’t cause any trouble as a parking spot for the evening. You’ll hear about “the festival atmosphere” from corporate reporters at Black Lives Matter riots as arson’s smoke drifts pasts their cameras, but for years Trump rallies have been more like big classic rock or country music concerts, complete with a tailgating feel, laughter, broad smiles, and a presidential soundtrack ranging from Guns n’ Roses to Celine Dion.

It’s a laugh, reading intrepid reporters’ accounts of the hostile mobs they claim to face at these events when the reality is far closer to the harmless cheers and boos of a medieval fair’s jousting match. There will be thousands who sit in traffic for hours just to get somewhere nearby, but the only frown is on the face of a driver stuck for a moment in the muddy grass of his makeshift “parking spot.”

A helicopter drifts nearby and Phil Collins’ “In The Air Tonight” begins as the loudspeaker announces Air Force One’s imminent arrival to booming cheers, the playlist shifting to “Eye of the Tiger” as the national plane pulls by.

Tears stream down the faces of two older women in the crowd. “I’m just so excited!” one exclaims, embarrassed, while a third friend chuckles and pats her on the back. 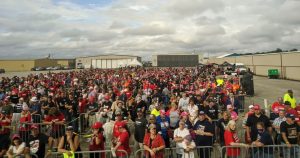 Emerging from the iconic presidential backdrop to cheers, applause, and chants of “USA!” the president launches right into it, praising “my late, great friend Arnold Palmer” and promising the crowd “I will keep your jobs in America, and I will bring violent looters, rioters, anarchists, I will bring them to justice.”

“We have more than 400 of them under arrest, these are bad people,” he continues, listing administration accomplishments from defeating ISIS to tackling “the China virus.”

“Now we have to get back to work,” he promises, counting the 61 days “until we win Pennsylvania.”

“We don’t have a lot of farmers in the crowd,” he says, moving off a quick riff on trade. “We have boilermakers. We have a lot of boilermakers in the crowds. You don’t mess with those guys,” he chuckles as fists rise in bandstand to the right, filled with the men and families of Pittsburgh’s Local 154, whose endorsement the president earned. “Those are tough guys.”

“I watch Nancy Pelosi say, ‘You must wear your mask, you have to wear your mask, and we’re gonna keep every beauty salon closed in California, all across the country,” he begins an hour in, launching into a comedy bit with his mock-impersonation of the speaker. “And then I see a picture, I say, “Where’s her mask?’ And I tell ya what, she must have treated that beauty saloon owner very badly. She uses the salon and the salon turned her in!?”

“Look they just turned off a camera,” he says, pointing toward the press stands amid roaring boos and laughing thumbs-downs, “because they don’t want me saying that!”

Night has fallen as the 90-minute, non-stop, no-warm-up evening comes to a close and the president turns back to his prepared remarks, lifting the crowd one last time with a rousing closer. “This is the commonwealth where our union was saved by the heroes at Gettysburg, and where generations of tough, strong workers mined the coal, worked the railroads, forged the steel that made America into the greatest, most powerful nation in the history of the world.”

As fans line up to buy hats — “I’ll have the red MAGA one, the blue one, and the USA one” — and folks help elderly relatives with an arm or a cleared path to walk, the crowds empty into the evening. Outside, the fortunate among the thousands of overflow viewers cheer and exchange slogans with the luckiest ones in the hangar.

“I didn’t see any counter-protesters,” a woman says to her husband as they make their way back to the parking lot.

It’s a full moon as we roll through the hills back toward the mountainside highway. It’s been a lively night in Latrobe, and some fans will be heading to the bars, but most will be headed home — the kids are getting tired, and tomorrow is still a workday.