You Stupid Boy
Home Chinese Virus The PM, the Doctor and the lies.

The PM, the Doctor and the lies.

The lying continues. The PM told us last night that we had been free of community transmission of Covid-19 for 102 days. That is a blatant lie.

For them to now put Auckland into level 3 lockdown, they must have known at least 14 or more days ago that there was a problem. Testing would have been done and the infection picked up then. Why is it only now they want to tell us?

Where did it come from? The PM says they don’t know but can rule out cross border travel. How does she know that? Given it has to have been at least two weeks that they have sat on this information, why bring more travellers into Auckland 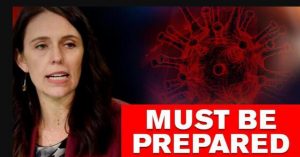 Yesterday a plane arrived in Auckland from Melbourne. The epicentre of the worst contamination in Australia. Who okayed that flight? Who was on it? Why did they not refuse to allow that flight to land?

How they expect us to believe them now is the question.

https://www.bitchute.com/video/euMT6jUwXhym/ CANADIAN COURT VICTORY PROVES COVID-19 IS A HOAX & ALL RESTRICTIONS HAVE NOW BEEN DROPPED Thanks to Braybots nemesis for posting this link yesterday. Send...
Read more
Chinese Virus

Why Are Globalists And Governments So Desperate For 100% Vaccination Rates? By Brandon Smith I don’t think I am the only person that has noticed it...
Read more
Chinese Virus