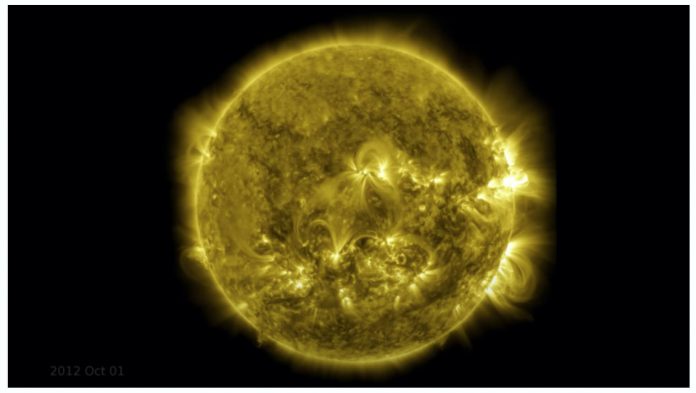 The video is a compilation of 10 years of images collected by the U.S. space agency’s Solar Dynamics Observatory

NASA has released an absolutely epic time-lapse video of the Sun that depicts 10 years of changes that it has undergone over the past decade.

And with many of us remaining indoors, the 61-minute-long NASA video showing an entire decade of the massive star is truly time well-spent – especially for some of you who are watching reruns of The Office for the fifth time.

The video is a compilation of 10 years of images collected by the U.S. space agency’s Solar Dynamics Observatory (SDO), which marked a decade of watching the Sun for ten years as of June 2020.

As of Monday afternoon, the video had already racked up 1.9 million views since it was uploaded on Wednesday.

“This is utterly incredible,” one user wrote in the comments section.

Unlike us humans, the SDO spacecraft is capable of safely fixing its gaze on the sun and watching all of the events that happen on the solar body – from its outburst-like flares to its massive mood swings, as well as extended periods of relative calm.

The time-lapse images were taken at an extreme ultraviolet wavelength of 17.1 nanometers in order to capture the outer atmosphere.

Every so often the video cuts out for a split second or shows a small bit of black passing along the disc of the sun. This is due to the Earth or Moon eclipsing the SDO as it passes between the spacecraft and the sun.

The SDO was able to capture massively high-resolution images of the sun every 0.75 seconds, and took one photo from every hour of footage to make the video – resulting in this stunning hour-long video.

“From its orbit in space around Earth, SDO has gathered 425 million high-resolution images of the Sun, amassing 20 million gigabytes of data over the past 10 years,” NASA said in a statement.

So if you can, make sure that you watch the video on a display with 4k resolution at the maximum height of 2160 pixels.

Likewise, you’ll also want to plug in your best sound-bar or Hi-Fi surround sound system, because the video is accompanied by a nice and spacey music track titled Solar Observer by German composer Lars Leonhard, who produces “ambient, dub-techno, and deep-atmosphere” music for labels as well as for NASA, according to his official Facebook page.

In 2016, the U.S. space agency also released a time-lapse of Mercury zooming past the Sun in a rare transit.

Sometimes we need a reminder to tell us that in the grand scheme of things, our troubles are quite temporary and they, too, will pass. Indeed, for some entities in this universe, a decade can come and go in the blink of an eye.

And for the sun, which has existed for about 4 and a half billion years and is expected to last another 5 billion years, a decade’s time is less than a drop in the bucket.

Once again, we highly recommend that you take the time to immerse yourself in the mesmerizing display compiled by NASA – you’ll walk away from the experience with zero regrets.

Previous articleUncover Chinese Corruption
Next articleComing to To Us Soon?