You Stupid Boy
Home US Politics The Winter White House 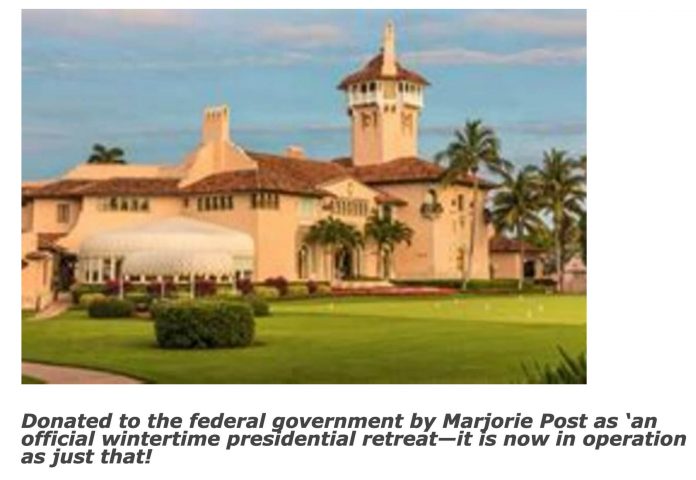 Amazing that the man who actually won the 2020 presidential election happens to be the same guy who bought the ‘Winter White House’ from the United States Government in 1985—and is now running a shadow government of Constitutional America from there.

Trump was first ever to host foreign leaders such as China Joe Biden’s boss (Xi Xinping) there as well as Japanese Prime Minister, Shinzō Abe while in office, so he’s treated it as his substitute White House before.

In September of 2019, President Trump and his lovely bride, Melania, made Mar-A-Lago in tax-free Florida their official residence, to escape the Socialist governor of New York and Communist mayor of their home city.

And Trump has already been active in his role of saving the nation from the Marxist forces occupying the American Corporation’s White House in Washingon, DC—after taking just a couple of days off to play golf.

He has allowed supplicants and apologists (like House Republican Leader, Kevin McCarthy) to come to Palm Beach for ring kissings and to get his blessing—or to take their spankings. 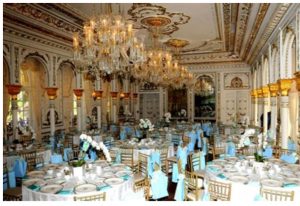 I don’t think President Trump invited McCarthy to stay for dinner.  It’s a little cramped for space in the dining room of the Southern White House—at least until Kevin does a little penance—maybe then.

President Trump should have made McCarthy mow the 17-acre lawn of the Southern White House for a week or two in my opinion before forgiving him—but he’s a bigger man than me.

Personally, I’m surprised the President let WormTongue back in the palace after he sided with the Bolsheviks stating that the president’s speech—which ended an hour after the January 6th Capitol Hill riot—somehow caused it.

So how did President Trump end up with the Winter White House?

Some folks say it is all part of ‘the plan’ but I’m going with the fact that businessman Trump, who always wants to buy the best (at a bargain) couldn’t resist the $7 million dollar steal for a home now worth $160 million.

I must admit it’s alluring to think that Trump holding court in the Southern White House is part of a divine plan—and it’s really, really compelling given all the evidence we’ve been disclosing about ‘the steal’—the same of which is leaking out now like water through a sieve.

At least 30 election fraud cases that were not dismissed are now before the courts, so this story is just beginning in many ways, and the evidence is overwhelming that it was stolen by foreign enemies and domestic traitors.

As that evidence seeps into the public square, the disgust for these evil people will only grow.

Not much has changed in President Trump’s life, however.

He still has Secret Service with him at all times—just like he did in the White House of the American Corporation back in Washington.

His Southern White House is fully staffed to do presidential business—including a SCIF—and he’s busy working on national policy and political issues daily to save his nation, just like he did in the White House of the American Corporation.

Even left-wing Wikipedia admits the unique status of his property:

Trump referred to Mar-a-Lago as his “Winter White House”,[35] and on occasion his “Southern White House”,[36] which is what Post originally intended for the property.

Mar-a-Lago has a Sensitive Compartmented Information Facility (SCIF) for communications with the White House Situation Room and Pentagon.[37] The Mar-a-Lago Crowd, an informal group organized by Trump which oversaw many of the activities of the Department of Veterans Affairs during the Trump administration, frequently met at the club.

We will soon see what happens with the White House of the American Corporation in Washington, where Biden’s Bolshevik squatters and Kamala’s CCP stooges think they are in charge.

If the military truly is in control, we can only hope they act soon.

Many believe the generals are just waiting until Biden’s popularity truly tanks—and it doesn’t look like their wait will be long.

He’s upset his criminal base—Antifa and BLM are already rioting against him and burning Democrat cities on the west coast once more.

He’s upset the pussy hat gang by destroying women’s sports and taking over their bathrooms for his pedophile associates and transgender weirdos respectively.

He’s destroyed millions of union jobs in the energy sector, and is now gunning for the rest of our jobs by making America uncompetitive with his put America last agenda retreat from Trump’s America First policies.

Now he’s lost much of his base in the African-American and Hispanic communities with illegal orders to stop deportations of criminal aliens who kill them and rape their daughters while flinging open the borders to all comers to steal their jobs.

Not a single policy decision yet has benefitted a single American taxpayer, worker, or citizen, and there will be a price to be paid for this treachery in service to America’s enemies.

For those who want to claim his $15.00/hour minimum wage hike will benefit the American people, I just ask that you read some economics and history before telling anyone that.

It will save you from looking stupid, I assure you.

That move will put a stake in the heart of any manufacturers trying to compete with Biden’s boss in Beijing, and even Democrats admit it will cost 2 million more jobs from those who need them most.

By the end of his first 100 days—if he makes it that long—Beijing Biden’s ratings will be in the 30s and the public will not only accept but be begging for the military’s move on ending the charade.

And guess what?  By then it will be Spring again, and I believe the American people, the courts, and public opinion in general will force the usurpers to leave and restore the rightful executive to his elected office.

We can then close the Winter White House for summer.

A good Spring cleaning to get rid of all the Marxist trash, a burning of those stacks of braindead and illegal Executive Orders to destroy America might be in order (the only book-burning I can get behind) and the ship of State will once again right itself.

I admit, that’s hopeful, but the American people don’t like getting tricked and they won’t stand for it once they see the hard facts.

While I’m not yet able to verify all of this with our contacts in DC, it is a very compelling 13 minutes of footage that we will try to verify.

The White House was blacked out on Monday, January 25th, for two hours in the middle of the night.  Buses and vans streamed in to Congress and then The White House—followed by one of the most impressive fireworks display behind the building itself.