You Stupid Boy
Home Did You Know? The World’s ‘Hottest’ Heat Pump 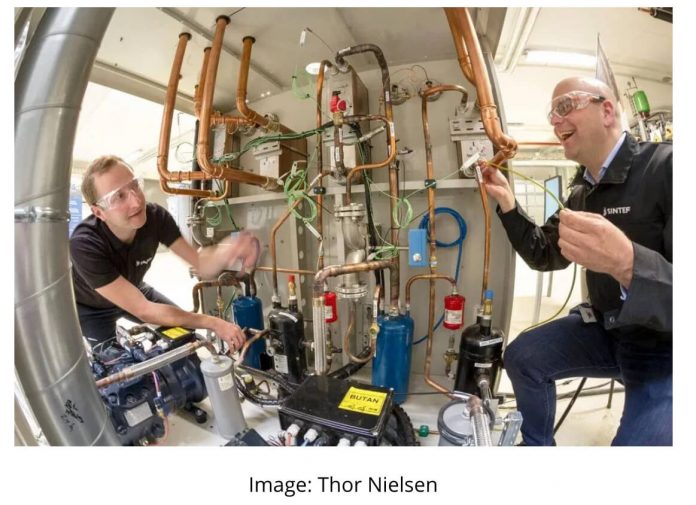 Researchers working with industrial partners have developed the world’s first heat pump producing temperatures of up to 180 degrees Celcius. Such record high temperatures will enable one-fifth of European industry to reduce its energy consumption by up to 70 percent, and become entirely climate neutral.

The heat pumps we use to heat our homes and domestic water operate at temperatures of between 30 and 60 degrees, but many industrial processes require much higher temperatures – and some industries require entirely different technology.

Industries, working with their research partners, have recently developed the world’s first heat pump that can produce process heat at temperatures of up to 180 degrees.

Perfect For A Fifth Of European Industry’s Needs

Different processes have different heating needs – from between 50 and 100 degrees, and upwards to many thousands of degrees. A fifth of the industries in Europe require temperatures of approximately between 100 and 180 degrees.

“This new heat pump delivers exactly what they want, so it has great commercial potential”, says SINTEF researcher Michael Bantle. “This will be low-hanging fruit for industries that are aiming to reduce both greenhouse gas emissions and energy consumption”, he says.

Industries that will benefit from heat pumps operating at these temperatures include the foodstuffs, fisheries and aquaculture, paper, oil and gas and metallurgy sectors.

The new heat pump represents the further advance of a technology initially developed for the processing of dairy products at TINE, in the Norwegian city of Bergen, and enabled the company to become the world’s first zero-emissions dairy. It was the first to utilise only heat pumps for industrial heating of these products and in a temperature range of 100°C.

“The project demonstrated how profitability could be achieved using green industrial processes”, says Bantle. “The heat pump enabled us to remove greenhouse gas emissions and save primary energy at the same time. Primary energy is that which is put into to the facility from outside sources”, he says.

TINE achieves this by upgrading its excess heat to process heat temperature with a series of heat pumps and thermal storages hereby reducing its total energy consumption by up to 50 percent.

Temperatures higher than 100 degrees are normally not required in the dairy sector and can be generated using ammonia and water as a working medium.

”This mixture is a well-known refrigeration agent, suitable for work temperatures of between 50 and 120 degrees”, adds Bantle.

Since their success at TINE, the researchers have been looking into how it might be possible to produce even higher temperatures using a heat pump concept that also utilises a climate-friendly refrigeration agent.

“In order to achieve temperatures of up to 180 degrees, we had to identify a refrigeration agent with somewhat different thermal properties, and we finally ended up with the most natural of them all – water”, says Bantle.

Combining Two Machines Into One

The project is a collaborative effort involving SINTEF, NTNU and the Norwegian compressor manufacturer Tocircle. Together they have developed a heat pump that combines SINTEF’s extensive R&D experience in the field of water and steam technology, with a rotary vane machine specially designed and built by Tocircle.

“The vane machine is a type of compressor equipped with vanes that rotates such that it changes the compressor volume with each revolution”, Bantle explains. “The secret behind Tocircle’s compressor is that all its moving parts that are in contact with the working medium are lubricated using water”, he says. 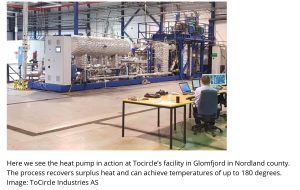 The use of injected water in connection with steam compression not only promotes lubrication but also reduces the thermal stress on the system. Without the water, there is a danger of overheating the compressor while it is being compressed.

“All these factors combined in a single machine offer a very promising platform for the development of a high-temperature heat pump with pure water as its work medium, and not least because many industrial processes already use steam as an energy carrier in the first place”, explains Bantle.

The researchers are anticipating that the new heat pump technology will enable reductions in industrial energy consumption of between 40 and 70 percent, facilitated by the recovery of low-temperature waste heat. This will consequently reduce the need to use gas or electric boilers.

“This means that we no longer have to waste any heat, but can keep the heat we generate all to ourselves”, says Bantle. “This, in turn, will drastically reduce our greenhouse gas emissions because it will be possible to retain the surplus heat generated by the industrial process, feed it into the heat pump, and so increase the process temperature”, he says.

“Investment in a heat pump costs money, but this technology will guarantee big savings that will enable us to recover our investment costs relatively quickly”, adds Bantle.

“Since we have excellent access to clean energy here in Norway, there will be no greenhouse gas emissions from the use of this heat pump technology”, says Bantle.

In large parts of Europe, where the energy mix is not exclusively renewable, perhaps only a third of energy sources can be regarded as clean.

”However, even here, the new heat pump technology will result in similar reductions in greenhouse gas emissions”, says Bantle. “Emissions reductions will depend only to a small extent on where the electricity comes from if the electricity is used to run a heat pump”, he says.

It is anticipated that the technology will be launched onto the market in 2021.

Facts About The Project:

The research project called ‘Free2Heat’ is a collaborative effort between SINTEF, NTNU and Norwegian pump and compressor manufacturers Tocircle, which supplies heat pumps to a number of industrial sectors.

The project is a spin-off generated at the HighEFF Centre for Environment-Friendly Energy Research.

World’s Largest Iceberg Has Just Broken Off an Antarctic Ice Shelf By Adam Vaughan An iceberg bigger than Majorca that calved off an Antarctic ice shelf has...
Read more
Did You Know?