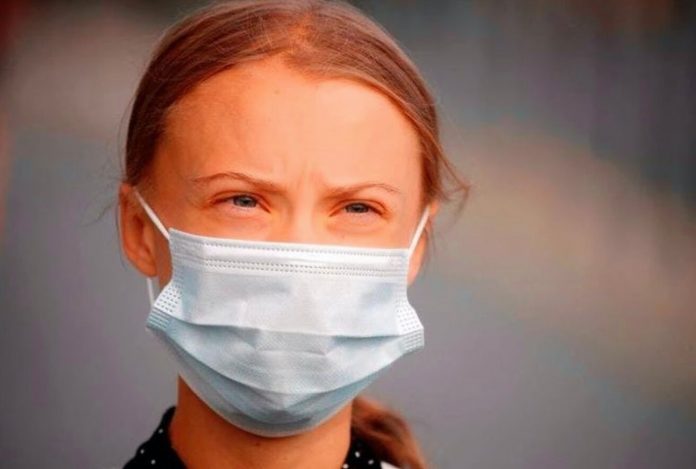 .James Macpherson:
World leaders stole her childhood and now coronavirus has stolen her crisis. So there’s nothing left for activist Greta Thunberg but to go back to school. The teen campaigner, dubbed the Goblin of Doom for her incessant warnings that carbon emissions are about to destroy the earth, has spent the past year circling the globe lecturing world leaders and organising protests.
.
But the same country that was exhaling a good portion of those emissions suddenly coughed up a flu bug that really did change the environment.
.
The Chinese flu has now made travel all but impossible. World leaders are suddenly preoccupied with an actual problem. And mass gatherings to protest a naturally occurring gas are banned for fear of contracting an unnaturally occurring virus.
.
Moreover, the great Covid-19 lockdown of 2020 has given the world a glimpse of “the new normal” should Greta realise her net-zero emissions dream. And no one likes it.
.
So last year’s Time Magazine Person of the Year suddenly has a lot of free time on her sanitized hands.
She tweeted Monday: “My gap year from school is over, and it feels so great to finally be back in school again!”
We can all say amen to that. Though, sadly for the Left, it leaves them looking for a new child to take their cues from.
Eleven months ago, Greta was skipping class to scold world leaders at the UN: “You have stolen my dreams and my childhood … how dare you!”
.
Watching world leaders grovel as the pigtailed Swedish school girl staged a hissy fit from the UN assembly podium was cringeworthy and yet morbidly fascinating.
.
For all her faults, she at least got to sneer “How dare you!” at UN leaders. What I wouldn’t give to do that! Along with about nine million Israelis, I suspect. But I digress.
.
Nothing better highlighted the hysteria and hypocrisy of warmists than world leaders inviting a kid to hector them about public policy and “saving the planet”.
.
The same people who dismissed anyone expressing doubt about climate change with shouts of “but you’re not a climate scientist” suddenly changed their retort to “but you’re not a climate scientist, or a Swedish school girl with fiery visions”.
.
The only thing more absurd than Greta being put front and centre on the world stage was the amount of media coverage her every utterance on the weather was given.
.
“I shouldn’t be up here,” Greta complained at the UN last September. “I should be back in school on the other side of the ocean!”
Indeed.
.
And now, thanks not to global warming but to global Wuhaning, she is.
Previous articleDemocrats Outraged
Next articleHave Your Say

Do you know what's in the jab? If people really knew the ingredients in vaccines they’d reject the poisoned needles. Of course, the ingredients listed in...
Read more
Chinese Virus

Euro Plans For ‘Vaccine Passports’ Were In Place In 2018. Coincidence? With the world being told that so-called ‘vaccine passports’ will be required for all...
Read more
Chinese Virus

Order now: your personal “non COVID-vaccinated passport” 1. Powerful statement of objecting the nonsense 2. Get a sense of support you’re not alone in not wanting the jab 3. Show others you’re...
Read more