There Are Over 100 Bullshit Gender Identities

A BBC program aimed at nine- to 12-year-olds claims that there are ‘over 100 gender identities’.

Entitled, ‘Identity – Understanding Sexual and Gender Identities’, the film is being offered on the BBC website as part of its relationships and sex education package.

The programme, which features children asking adults about sexuality and gender on behalf of their peers, suggests the different identities include ‘bi-gender’, ‘gender-queer’ and ‘pansexual’. 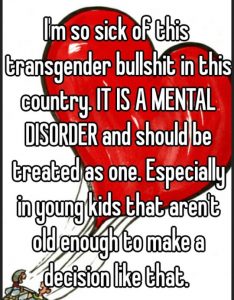 The film also tells children that becoming transgender is a way to be ‘happy’ while making no mention of the growing legal and medical concerns about the rising number of children saying they want to change gender.

A majority of school-age children are currently being forced to resort to online learning because the lockdown has shut access to the classrooms for all but key workers.

Last night, the BBC said teachers were ‘strongly advised’ to watch the film before viewing it with their pupils.

The film makes no mention of the medical interventions that some transgender children undergo, such as the untested hormone-blocking drugs whose use has effectively been banned by a recent High Court ruling.

The NHS Tavistock Centre treating children for gender issues was last week branded ‘inadequate’ by a watchdog, which found staff did not keep basic records on the treatment of vulnerable children given hormone treatments.

‘Resources used in teaching about this topic must always be age-appropriate and evidence-based,’ it said, while teachers must ‘not reinforce harmful stereotypes, for instance by suggesting that children might be a different gender based on their personality’.

The BBC said last night that more than 50 teachers participated in consultation exercises which helped to inform the series, and that it was ‘clearly stated’ on the BBC Teach website that ‘due to the sensitive nature of the subject matter, we strongly advise teacher viewing before watching with pupils’. 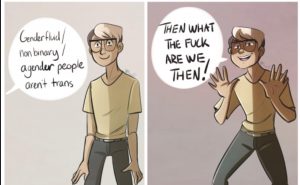