You Stupid Boy
Home Space There IS someone else out there!

There IS someone else out there! 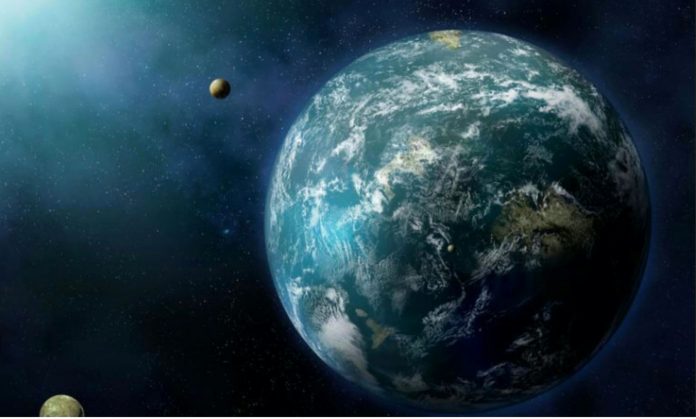 A team of scientists say they have found what could be the most Earth-like, potentially habitable exoplanet thus far.

A team of scientists say they have found what could be the most Earth-like, potentially habitable exoplanet thus far.

TOI-700 d, is extremely close to the same size and mass as our own planet. Furthermore, TOI-700 d orbits within its host star’s habitable zone. According to a pair of papers published in The Astrophysical Journal by Harvard-Smithsonian Center for Astrophysics, scientists that analyzed the distant star system, TOI-700 d, marked it as one of the best candidates discovered thus far which resembles an Earth 2.0.

The scientists used and refined data from the ‘Transiting Exoplanet Survey Satellite’ to analyze the planet.

In a third paper in The Astrophysical Journal, the researchers suggest that the planet could have a livable atmosphere and climate. This is due to its ideal distance from its star, as well as water on the surface.

The scientists say that it would take special operations to actually determine if there’s air and water on TOI 700 d. However, since it’s so far away, that is easier said than done.

On the other end of habitable planets, scientists have previously discovered seven Earth-sized planets orbiting a star called TRAPPIST-1 and announced the discovery of 60 other potentially livable planets. In another significant discovery worth mentioning, years ago scientists from the Complutense University of Madrid shockingly announced that they believe at least two planets exist beyond Pluto which they called ‘Extreme Trans-Neptunian Objects’ (ETNOs), adding that they are larger than Earth, but potentially habitable.

Astronomers only just discovered TOI 700 d in January of this year, only one hundred light years away. TOI 700-d is the first Earth-sized world with moderate temperatures found by NASA’s newest planet-hunting space telescope, the Transiting Exoplanet Survey Satellite (TESS), New Scientist reported. It’s also worth mentioning that earlier this year in February, an astronomy student, Michelle Kunimoto, made a discovery of 17 new planets including one that is similar to Earth, KIC-7340288 b.

TOI 700 d and the other more than 60 plus planets may support alien life, but to find that out will require resources and years of exploration, depending on the distance of the world.

Previous articleBeware, Its not always as it seems
Next articleHave Your Say