You Stupid Boy
Home Chinese Virus This is how you do it, Mike Bush

This is how you do it, Mike Bush 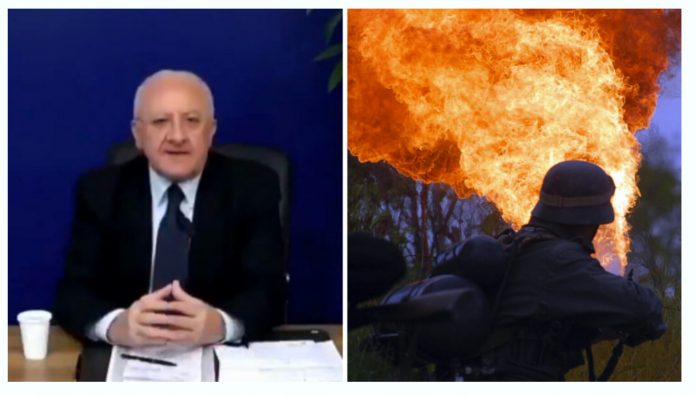 “We will send police. With flamethrowers.”

Italian mayors have started to become extremely hostile in their public addresses, as many citizens are refusing to comply with the social distancing orders that have been put into place.

Vincenzo De Luca, mayor of the Italian town of Campania, gave an angry speech from his Facebook page where he threatened to send police “with flamethrowers” to illegal gatherings like graduations parties that were happening in the midst of the nationwide quarantine.

“I’m getting news that some [people] would like to throw graduation parties… We will send police. With flamethrowers,” De Luca said, according to the National Post.

In another rant published to social media, Massimiliano Presciutti, the mayor of Reggio Calabria, complained of people walking their dogs like Will Smith in I Am Legend.

“Where the f*** are you all going? You and your dogs… which must have an inflamed prostate?” he said in a video circulating on social media.

Presciutti claimed that he stopped dog walkers on the street to shame them about being outside.

“I stopped him and said, ‘Look, this isn’t a movie. You are not Will Smith in I Am Legend. Go home,” he said.

Antonio Tutolo, the mayor of Lucera, was upset that people were going out to get their hair done.

“Getting in mobile hairdressers? What the f*** is that for? Who the f*** is supposed to even see you with your hair all done in a casket? Do you understand the casket will be closed?” he said.

The streets are mostly empty throughout the country, but there are still some people who are defying the order for a variety of reasons. Police say that at least 40,000 people were fined for being outside in the first week of the lockdown. Italians who are found to break quarantine while being infected with the virus could face up to 21 years in prison.

Even gatherings like funerals have also been banned. At least 50 people in Sicily are facing serious criminal charges after breaking the quarantine order after having a funeral for a loved one.

Italy has the worst experience with the CoViD-19 virus than any other country thus far, with over 6,000 deaths and 64,000 cases of the illness. However, the number of new cases in the country have started to decline in recent days, giving hope that the worst could be over.

The head of Russia’s republic of Chechnya said Tuesday that anyone who breaks the coronavirus quarantine and infects others should be killed, according to local news reports.

“If you ask me, anyone who creates this problem for himself should be killed,” Ramzan Kadyrov said, the regional Caucasian Knot news agency reported.

“Not only does he get sick, [but he also infects] his family, his sisters, brothers, neighbors.”

Kadyrov made the statement during a Chechen government meeting, according to The Moscow Times.

At the time of the meeting, the republic, which is a subject of the Russian Federation, had confirmed its first three cases of coronavirus.

Kadyrov’s statement was in response to a Chechen resident who returned from a visit to Mecca and didn’t comply with the quarantine.

During the meeting, health minister Elkhan Suleymanov said three people who had visited Turkey, Mecca and Saudi Arabia had all displayed symptoms of COVID-19, Newsweek reported.

Kadyrov cautioned Chechens to “not move around” because if “one thousand people have to come into a hospital in one day, we can’t do anything,” Newsweek reported.

On Tuesday, he also ordered all restaurants and “crowded places” in Chechnya to close to try to stop the spread of coronavirus, according to The Moscow Times.

Previous articleTarrant Pleads Guilty
Next articleHeard From the Greens? Hypocrisy Anyone?