You Stupid Boy
Home US Politics Trump In Afghanistan 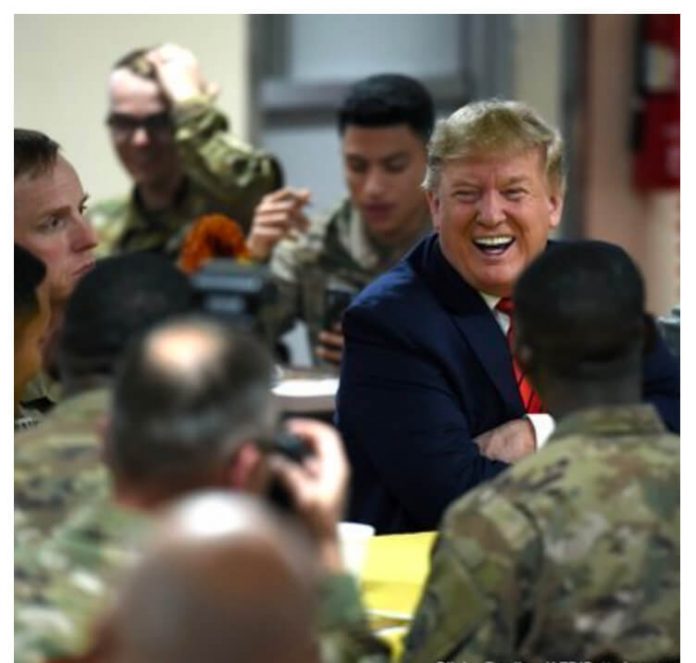 President Trump made a surprise Thanksgiving Day trip to Afghanistan to visit with US troops at Bagram Air Field and to meet with Afghan President Ashraf Ghani. The commander in chief was warmly received by troops as he served them turkey, sat at a dinner table with them, posed for photographs and gave a speech thanking them for their service.

“As President, I truly have no higher honor than to serve as Commander-in-Chief of the United States Military—the greatest force for peace and justice in the history of the world!”@POTUS @realDonaldTrump pic.twitter.com/KPw7aSok7z

.@POTUS @realDonaldTrump:
“We have the most powerful military in the world by far…This evening, as millions of families sit down at their dinner tables back home, they’ll say a prayer for the men and women serving in our nation in Afghanistan and deployed all around the globe.“ pic.twitter.com/vrucqw6tNh

United States Army General and the 20th Chairman of the Joint Chiefs of Staff Mark Milley introduces the 45th President of the United States @realDonaldTrump at Bagram Airfield in Afghanistan. HAPPY THANKSGIVING!!🇺🇸🇺🇸 pic.twitter.com/uMRA5t5yyk

As we depart Afghanistan w @realDonaldTrump after thanking troops for their service & wishing them a Happy Thanksgiving…I am (again) so grateful for our great military & their families. Thank you for all that you do! 🇺🇸

President Trump told the troops that ceasefire negotiations with the Taliban were back on. Trump also thanked Afghan troops.

Previous articleDon’t Poke The Bear
Next articleHave Your Say