You Stupid Boy
Home US Politics Trump Wins Yet Again 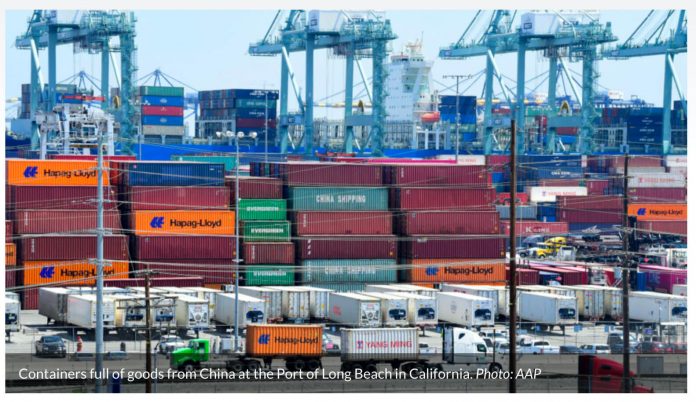 The United States and China announced a “Phase one” trade agreement that reduces some US tariffs in exchange for a big jump in Chinese purchases of American farm products and other goods.

Beijing has agreed to import at least $US200 billion ($290 billion) in additional US goods and services over the next two years on top of the amount it purchased in 2017, US officials say.

If the purchases are made, they would represent a huge jump in US exports to China. China bought $US130 billion ($188 billion) in US goods in 2017, before the trade war began, and $US56 billion ($81 billion) in services, US Bureau of Economic Analysis data show.

In return, the United States would suspend tariffs on Chinese goods due to go into effect on Sunday and reduce others, US officials said.

The 86-page agreement is due to be signed the first week of January in Washington by principal negotiators.

“We have agreed to a very large Phase One Deal with China,” US President Donald Trump tweeted Friday morning.

We have agreed to a very large Phase One Deal with China. They have agreed to many structural changes and massive purchases of Agricultural Product, Energy, and Manufactured Goods, plus much more. The 25% Tariffs will remain as is, with 7 1/2% put on much of the remainder….

Officials in China have “agreed to many structural changes and massive purchases of Agricultural Product, Energy, and Manufactured Goods, plus much more”, he said.

Trump later told reporters at the White House that he thought China would hit $US50 billion ($72 billion) in agricultural purchases, repeating a promise he made to US farmers in October.

At a news conference in Beijing, Chinese officials said the two sides had agreed on the text of a deal, but offered no specific details on the amount of US goods China had agreed to buy.

US markets have gyrated on rumours and leaks about the trade deal in recent months, but were muted on Friday on news it had been agreed.

The agreement was announced as the US House Judiciary Committee voted to charge Mr Trump with abuse of power and obstruction during an impeachment inquiry.

It also followed closely on the heels of a deal with the US Congress paving the way for passage of a new North American trade agreement.

Previous articleMore Bullshit About Carbon
Next articleHave Your Say

Russian forces start shelling Kyiv Military correspondent Cossack Colonel Yuri Kominyenko In response to the shelling of civilians in the liberated city of Donetsk, the RF...
Read more
US Politics