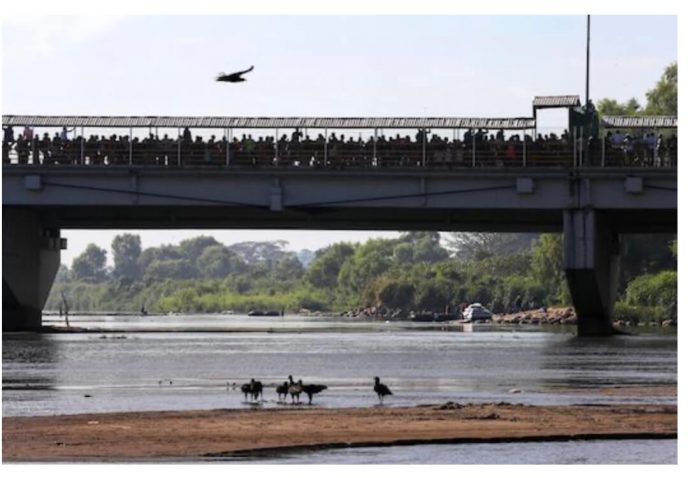 More evidence that President Trump’s immigration policies are having great effects, from the Wall Street Journal: “Mexican Forces Clash With Migrants at Border With Guatemala.”

Mexican security forces used plastic shields to push back hundreds of Central American migrants who tried to force their way across a border bridge from Guatemala into Mexico on Saturday.

Lines of National Guard officers jostled with migrants, some of whom threw bottles and wielded sticks as they tried to push their way into Mexico. President Andrés Manuel López Obrador has vowed to stop migrants from entering the country illegally as they try to reach the U.S.

The migrants are part of a group of some 1,500 people, mostly from Honduras, who gathered on the Guatemalan side of the Mexican border Friday.

This is another attempt to form a caravan to invade the United States, organized by “leftist Honduran activist[s].” (Parenthetically, I still would like to know who is paying for this “activism.”) But this time, it isn’t working. Why?

Mexico is determined to stop a replay of similar incidents in 2018 and 2019, when thousands of migrants entered the country in caravans and headed for the U.S. border. The regional migration crisis drew the ire of President Trump.
***
The Mexican leader yielded last year to Mr. Trump’s demands that Mexico adopt a tougher stance against illegal immigration. Mr. Trump had threatened to impose tariffs on Mexican imports if Mexico didn’t act. Since then, apprehensions of Central American migrants at the U.S. border have plummeted, while the number of detentions and deportations of Central Americans by Mexico have risen sharply.

Migrants’ chances of entering the U.S. are the lowest in years. The U.S. government has sent nearly 60,000 migrants to Mexico while they wait for the U.S. to process their asylum requests. The Trump administration has signed asylum agreements with Guatemala, Honduras and El Salvador to send migrants to seek protection in those countries instead of in the U.S.

“Asylum” in this context is a farce, basically meaning that it is better to live in the U.S. than in Honduras or Guatemala because of the historic benefits of our free enterprise system and relatively corruption-free economy. More important, this is great news, and another practical accomplishment of the Trump administration. I have often said that my first choice for an immigration policy would be Canada’s, but that I would willingly settle for Mexico’s. Here, we are seeing the benefit of Trump’s pressure on Mexico to enforce its own laws rather than passing the “caravan” buck to us. Kudos to Donald Trump and his administration.