You Stupid Boy
Home Chinese Virus Trust us, we know what we are doing?

Trust us, we know what we are doing? 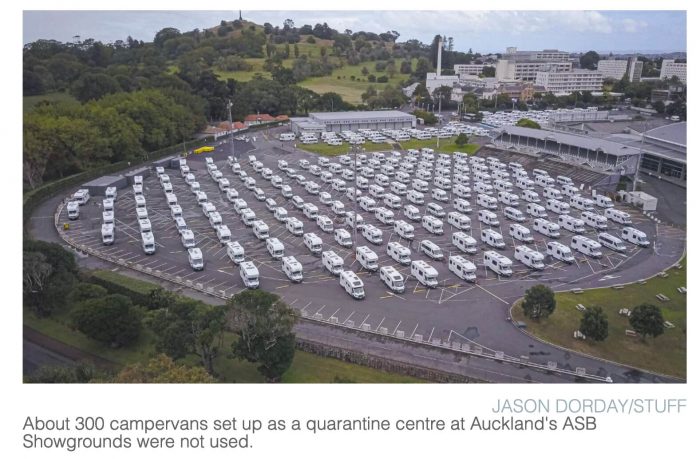 Hundreds of camper vans hired by the Government as makeshift quarantine centres have been returned to storage after sitting idle.

The motorhomes, which were hired for $2 million, were set up at the Canterbury Agricultural Park in Christchurch, Wellington Top 10 Holiday Park in Lower Hutt, and ASB Showgrounds in Auckland in late March as part of the Ministry of Health’s approach to making sure travellers were able to isolate.

It is understood only 25 motorhomes in Wellington were in use. The remaining motorhomes were returned to storage over the last week. Those in use at Wellington remain at the holiday park though all but a handful are no longer contracted to the ministry.

A Ministry of Business, Innovation and Employment (MBIE) spokeswoman said the number of motorhomes was set based on early estimates that there would be a high number of Kiwis returning home over a short period of time without accommodation that would comply with lockdown requirements.

She said those returning to New Zealand had been spread over a longer time period than initially estimated and so hotels were able to manage them, meaning most of the motorhomes were not needed.

“Due to this the motorhomes are being removed from the sites in order to be able to be redeployed to other areas around New Zealand if required,” she said.

“The motorhomes are ready and available to support a surge in demand should the need arise.”

The vehicles were supplied from Tourism Holdings Limited (THL), which operates several brands including Maui and Britz and claims to be the largest provider of holiday vehicles for rent or sale globally.

The $2 million contract allows the ministry access to the motorhomes until September 2020.

Chief executive Grant Webster said all camper vans at the sites in Auckland and Christchurch, had been returned to storage, while most of them at the Wellington site had been handed back to THL.

He said the company had been told the Government did not require any further use from them.

The camper vans were to have housed people returning from overseas during the lockdown if needed, similar to the way the Whangaparāoa Reception Centre north of Auckland was used for residents returning from China and cruise ship evacuees.

Where would you stay if you had the choice. A five star hotel or a campervan in the out skirts of town?