You Stupid Boy
Home World News Up Yours Mr Xi

Up Yours Mr Xi 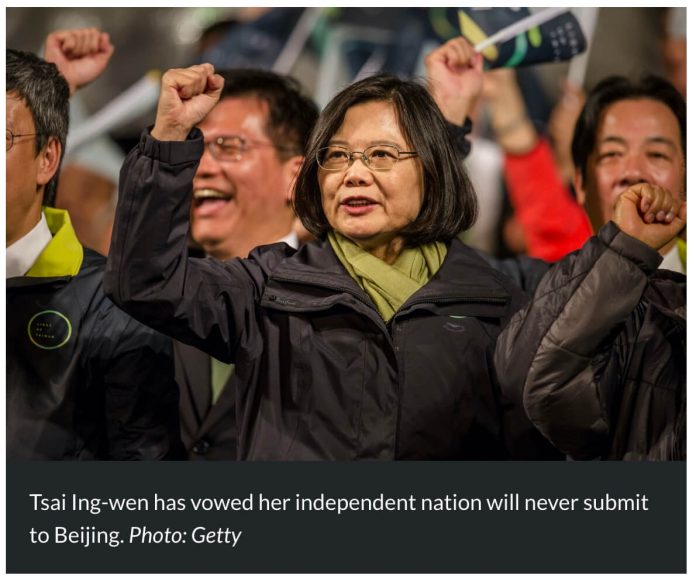 Taiwanese President Tsai Ing-wen, known as the Iron Cat Lady,  has been re-elected in a landslide in a stern rebuke to China that could fuel further tension.

Anti-government unrest in Chinese-ruled Hong Kong took centre stage during a campaign in which Tsai held up Taiwan as a beacon of hope for protesters in the former British colony and rejected Beijing’s offer of a “one country, two systems” model.

China claims Taiwan as its sacred territory, to be taken by force if needed, a threat President Xi Jinping reiterated a year ago while saying he preferred a peaceful solution.

“We hope that the Beijing authorities can understand that a democratic Taiwan with a government chosen by the people will not give in to threats and intimidation,” Tsai told reporters on Saturday.

She added that Beijing needs to understand the will of Taiwan’s people, and only Taiwan’s people can decide its future, repeating her firm opposition to “one country, two systems”.

China’s Taiwan Affairs Office reaffirmed its commitment to this approach and its opposition to any form of independence, in a statement carried by state media.

Tsai beat her main opponent Han Kuo-yu of the Kuomintang party, which favours close ties with China, by more than 2.6 million votes.

Underscoring the scale of her victory, Tsai’s Democratic Progressive Party also won a majority in parliament.

The US, Taiwan’s strongest international backer and main arms supplier, congratulated Tsai. Secretary of State Mike Pompeo called Taiwan a “force for good in the world”.

“The United States thanks President Tsai for her leadership in developing a strong partnership with the United States and applauds her commitment to maintaining cross-Strait stability in the face of unrelenting pressure,” Pompeo said in a statement.

Tsai won almost 8.2 million votes in total, more than any Taiwan president since the island held its first direct presidential election in 1996.

Speaking in the southern city of Kaoshiung where he is mayor, Han, who had to fend off allegations from Tsai on the campaign trail that he and his party were puppets of Beijing, said he had called to congratulate Tsai.

“I still hope to see a united Taiwan after we wake up,” Han said, accompanied by a swell of mournful music on stage.

“I urge President Tsai Ing-wen to focus on giving people a life where they can live safely and happily.”

Han said Taiwan could only be safe and prosperous if it had good relations with Beijing.

Previous articleHave Your Say
Next articlePerving On The Perverted

Yesterday was actually a pretty big day in the world of digital advertising. Apple released its latest iOS 14.5 operating system for all iPhones around...
Read more
World News

No Need To Be Lonely Anymore

Company Sells Sex Robot ‘Clones’ Of Dead Partners Using 3D-Modeling Technology By Elias Marat For many people who have lost their significant others, sex dolls have...
Read more