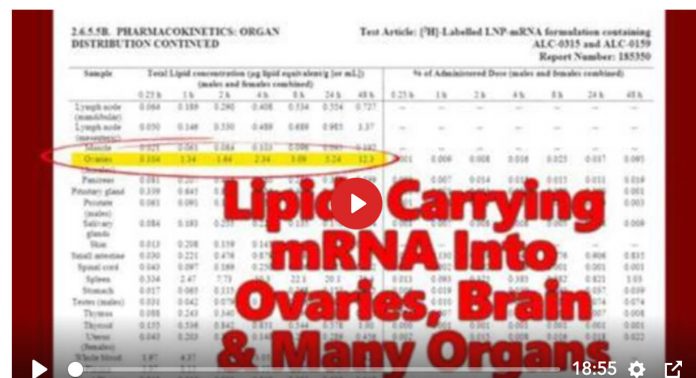 “Not surprisingly, everything the establishment tells us about covid vaccines has been a calculated lie. One of the biggest and most treacherous lies is that “mRNA vaccine shots stay in the arm and don’t circulate nanoparticles around the body.” Now we know that is a complete lie, as new research conducted in Japan shows that Lipid NanoParticles (LNPs) containing the mRNA code are widely circulated around the body after vaccination, reaching the brain, spleen, large intestine, heart, liver, lungs and other organs.

The study paper, originally written in Japanese and auto-translated into English, can be found at this link on Natural News servers (PDF).

Labeled, “Pfizer confidential,” the study is known as a bio-distribution study that uses luciferase enzymes and radioisotope markers to accurately track the distribution of Pfizer’s mRNA LNPs across the body. The first section is labeled:

The study reveals how mRNA LNPs are distributed across the body, even affecting ovaries and testes, raising huge questions about fertility in those receiving mRNA vaccine shots.”

Prominent business leader Clive Palmer has called on Prime Minister Scott Morrison to stop the rollout of the COVID-19 vaccine following the most recent Therapeutic Goods Administration (TGA) report which showed the treatment was responsible for the deaths of 210 Australians and more than 22,000 adverse reactions.

“The most recent TGA report (https://www.tga.gov.au/periodic/covid-19-vaccine-weekly-safety-report-27-05-2021) confirms that in Australia we have had 210 deaths which means 210 families are waking up without loved ones as a result of the rollout,” Mr Palmer said.

“If these figures were modeled out it would show the real extent of how damaging the vaccine is. The truth is once the vaccine is in your system it’s there for life.

“Animal testing on the vaccine was stopped because it resulted in 50% death rates, a figure which has been confirmed by the US Centres for Disease Control.

“It should be concerning for all Australians that we don’t have the required one, three or five-year safety data for the use of this vaccine on humans or animals, and there has been no testing on pregnant women,” Mr Palmer said.

“The most appalling issue about the vaccine is that there is no scientific testing that ensures you can’t get COVID or that you can’t pass it on.” 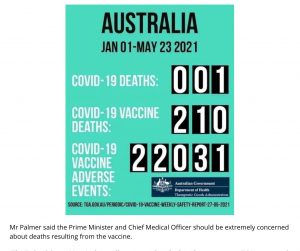 “The Federal Opposition Anthony Albanese needs to look at the most recent TGA report and question his Catholic beliefs. In his role as opposition leader, he needs to examine his moral compass on this issue,” Mr Palmer said.

“The Federal Government needs to stop wasting tax payer funds on advertising this vaccine which is causing deaths. It’s the regulators that need to regulate and examine the truth about the vaccine and not promote it.

“Today I will be discussing with my legal team what we can do to stop the Government’s roll out of the vaccine,” Mr Palmer said.

Previous articleINDIAN TAKING DOWN THE TWITTER COWBOYS
Next articleWhy Not?