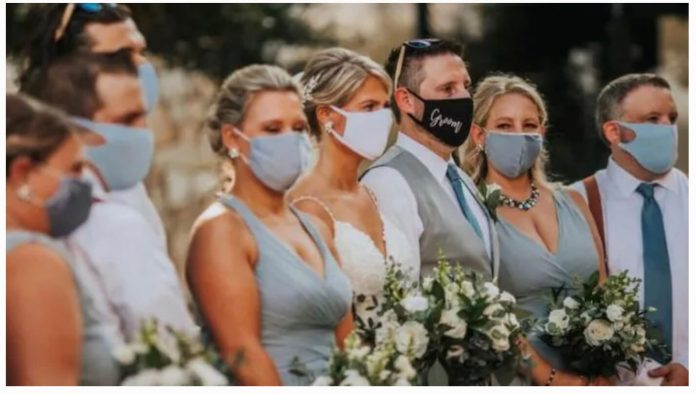 A group of fully vaccinated attendees at an outdoor wedding have tested positive for COVID-19 in Texas, according to reports.

A pre-print uploaded to MedRxiv described a coronavirus outbreak involving the Delta variant at an outdoor wedding in Houston, Texas last April.

Forbes.com reports: The wedding took place outdoors in a large open-air tent. The wedding had 92 attendees, all of whom were required to have been fully vaccinated prior to the event. The first to get sick were a man and woman who had traveled from India. The man had had no existing medical problems and the woman had diabetes. Both had tested negative for the severe acute respiratory syndrome coronavirus 2 (SARS-CoV-2) prior to boarding the airplane and had traveled to Houston 10 days after receiving their second doses of the Covaxin BBV152 vaccine, manufactured by Bharat Biotech.

Four other guests who had interacted with the man and the woman ended up testing positive for SARS-CoV-2 too. Two of these guests had been fully vaccinated with the Pfizer/BioNTech Covid-19 mRNA vaccine and two with the Moderna Covid-19 mRNA vaccine. One of the guests who had received the Pfizer/BioNTech vaccine was a male in his 60’s who had no existing medical conditions. He ended up developing severe symptoms, had to get admitted to the Baylor St. Luke’s Hospital, and received the Regeneron monoclonal antibody infusion treatment. Besides the two wedding attendees who got hospitalized, it isn’t clear from the pre-print what exactly happened to the other four wedding attendees who had developed symptoms.

Previous articleHave Your Say
Next articleHowl of Protest Rally