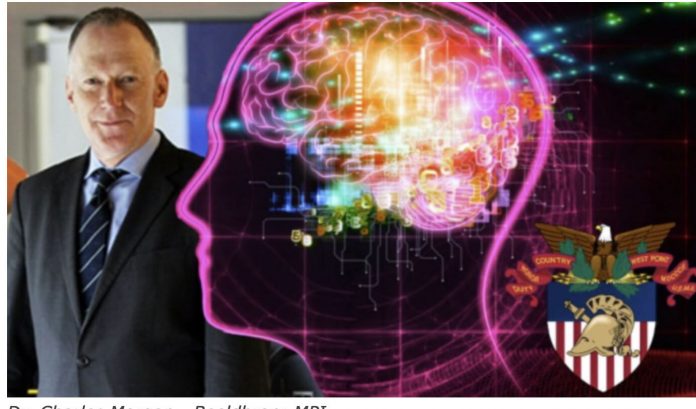 The use of RNA vaccines to control the human brain, explained by a CIA neurobiology expert at a conference at the West Point Military Academy.

Independent journalist Guy Boulianne has unearthed a very important piece of information about the possibility of using RNA vaccines to manipulate our brains. This hypothesis did not come from a major conspiracy theorist: it was a CIA neurobiology expert who presented it at the West Point Military Academy, reports Unser Mittel Europa.

On June 13, 2018, Dr. Charles Morgan, a neurobiology expert from Yale University, DARPA, and the CIA, gave a lecture to students at West Point Military Academy. He spoke about the possibility of altering DNA for mind control purposes. [1] Dr. Morgan demonstrates and explains to elite American military students how technologies known by the acronyms CRISPR (Clustered Regularly Spaced Short Palindromic Repeats) and DREADDS (Designer Receptor Exclusively Activated by Designer Drugs) can “design” anything.

Dr. Morgan shows how DREADDS can be “infused” into human DNA to control our behavior. These designer receptors, activated exclusively by designer drugs, can create new cells. They can create new memories and behaviors in their subjects. They can also use them to erase or even change your memory. CRISPR technology can be used to kill only certain races of people via DNA editing.

Dr. Morgan tells students at Modern War University in West Point that “the technology called CRISPR makes a number of things readily available … You can design anything. You can design one thing that would kill just one. When you make plasmids and put them into cells, it sends out a signal and tells which part of the DNA to uncoil, unfold and produce a product. That’s the future of medicine.”

Dr. Morgan asks, “What could you do with this technology if you were in security and intelligence?” The cells “can be designed for specific activities and purposes. They can be strategically placed. They can be remotely controlled. So these cell controls “can activate things in other people’s brains.”

In 2011, cellular-level technology seemed to control “the programmed delivery of information on demand.” By 2018, the power to replace one’s own memories and decisions with the surrogate reality of controllers via blood, brain and cells had already passed any behavioral conditioning via cell phones. For Dr. Morgan, the new possibilities lead to improvements in delivery and comprehensiveness. “Why have a digital system when you can have a DNA system?” he asks.

Dr. Morgan is very explicit in his slide presentation, “Cells can be designed for specific activities and purposes. Cells can be strategically placed. They can be controlled remotely.” The new technology allows his controllers to activate things in other people’s brains. Further, the doctor, who now teaches at the University of New Haven, imagines how the combination of “DNA systems” with “quantum computing” could be “a truly amazing threat that is also deadly.” Thus, with the dose of Pfizer and Moderna, an end point in the global agenda of those in power may have been reached.

Previous articleWokery Is Snobbery
Next articleHave Your Say

https://nzdsos.com/wp-content/uploads/2021/08/Reply-of-HRC-to-NZDSOS-20-August-2021-1.pdf And Then We Get this: This is a very chilling video and a good topic for YSB. https://www.woolstangray.eu/must-watch-funeral-director-john-olooney-blows-the-whistle-on-covid/ https://www.bitchute.com/channel/TheCrowhouse/ As per that link, the subject in the...
Read more
Chinese Virus

Whistleblower Testimony that COVID-19 Vaccines Are Killing and Harming People! by Brian Shilhavy See the stunning report from a UK Funeral Director that the COVID PANDEMIC is...
Read more
Chinese Virus

Israel Proves Vaccinations Cause Covid Written by Henry Makow Israel is one of the world’s most highly jabbed countries for protection against flu/covid — not gotten. On...
Read more