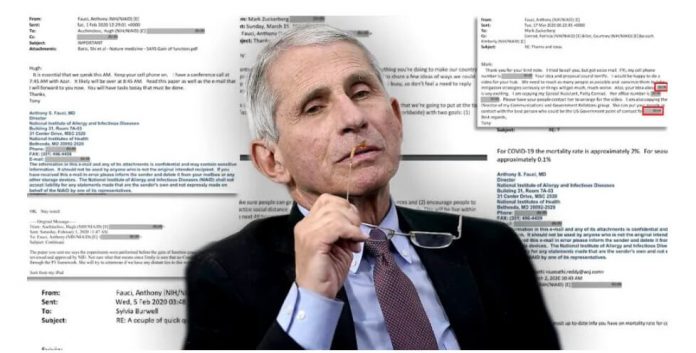 Last week, Dr. Anthony Fauci made perhaps the most damning confession in the Covid vaccine saga.

So far-reaching are the implications of his statement that the interview in which he made it may well prove a turning point in the fight against the vaccine fraud that is being perpetrated on the peoples of the world.

In a November 12 podcast session with the New York Times, Fauci was forced to admit the fact that the vaccines do not reliably protect their recipients from serious Covid or death.

Called upon to explain the data coming from Israel – a country with one of the highest vaccination rates in the world – Fauci said the following:

“They are seeing a waning of immunity not only against infection but against hospitalization and to some extent death, which is starting to now involve all age groups. It isn’t just the elderly” [emphasis added].

In other words, the vaccines’ protective efficacy wanes not only in regard to the threat of infection but also in regard to severe Covid and death. Speaking about the effectiveness of the vaccines in countries with high vaccination rates, Fauci admitted:

Even though Fauci tries to palliate the hard impact of his answer in soft language, the harsh truth behind his words is painfully evident.

Fauci’s words amount to the admission that the vaccinated are getting infected and more and more of them are ending up in hospital where they keep succumbing to Covid at increasing rates.

This is what data from Israel and other highly vaccinated countries has indicated for some time now. In the United Kingdom, for example, between February and September of this year, 72 percent of all Covid-related deaths were among the vaccinated. In Scotland the situation was even worse: 80 percent of Covid deaths occurred among those who had been injected with the vaccines.

For months Fauci and his fellow vaccinators censored the unfavorable data while claiming that the injections protected against serious Covid and death. The evidence to the contrary was clear and extensive. More than two months before Fauci’s admission, we marshaled some of it a piece titled The Vaccines Do Not Stop Severe Covid or Death.

Fauci was, of course, well familiar with the data we used, but he did everything he could to keep it concealed from the public for as long as he possibly could. Rather than coming out clean, he kept spreading misinformation about the vaccines’ alleged efficacy to protect people from falling seriously ill and dying.

But in the end, even such an adroit prevaricator as Dr. Fauci could not hold out any longer under the weight of evidence.

If you notice in Fauci’s latest New York Times interview there is almost a sense of panic, as he mentions younger people. Those who are familiar with the actual data rather than the misinformation narratives propagated by the mainstream media know that Covid has been primarily a disease of the elderly.

In almost all places and regions, the median age of Covid-related deaths tends to be higher than the average life expectancy. Younger individuals who were healthy were generally safe from the most severe forms of the disease. But now, in countries with high vaccination rates, we are seeing younger vaccinated individuals coming down with serious Covid and even dying.

This appears very much like the case of antibody-dependent enhancement. Some of the world’s best scientists in the field have warned precisely against this danger. Included among them are Dr. Robert Malone and one of the world’s leading virologists Luc Montagnier.  Professor Montagnier won the 2008 Nobel Prize in Medicine and Physiology for his work on the virus that causes HIV.

Their warnings have, however, have not only gone unheeded but both men have been censored and suppressed by the vaccinators with the help of Big Tech and the mainstream media.

It is not our purpose, however, to discuss antibody-dependent enhancement in this piece. What we wish to do here is to focus on Fauci’s game-changing admission that the vaccines fail to protect against hospitalization and/or death.

We have already known for some time that the vaccines do not protect from infection even though we were initially told that they were 95 percent effective. This turned out to be a big lie, which the vaccinators managed to keep alive for nearly 9 months. Eventually, however, under the overwhelming weight of data coming in from highly vaccinated countries that experienced subsequent surges of infection, they did have to admit the truth.

On August 5 of this year, CDC Director Rochelle Walensky confessed on CNN that the vaccines can no longer “prevent transmission.”

In other words, the vaccines have little effectiveness in protecting people from becoming infected with the virus and then in turn infecting other people with it. Just how completely ineffective the vaccines can be seen from a recent Wall Street Journal report about the Ottawa Senators hockey team which has a 100 percent vaccination rate. And yet, despite this, 40 percent of the players on that team are currently testing positive for Covid.

The disturbing part of this is that the vaccinators have known about the vaccine failure at least from the early summer. But rather than calling off the worldwide vaccination drives that have injected hundreds of millions of people with ineffective substances, the vaccinators changed their tack and argued that even though the vaccines will not protect you from infection they will still keep you from serious Covid and death.

Last week, however, this lie was also put to rest by none other than Dr. Fauci himself.

How, then, should we describe vaccines that:

Complete failure is the phrase that fits best here.

But these vaccines are worse than useless. They are, in fact, very likely among the most deadly and dangerous vaccines ever released upon the public.

The question is this: Why are we still injecting people with these ineffective and dangerous substances? What is the purpose other than to enrich those who are involved in their production and distribution?

Now Big Pharma, Fauci and Co., and their media shills say we need to take their boosters to keep ourselves protected (which we never really were). The boosters, however, will likely be as ineffective as the original failed shots.

The CDC has recently approved a fourth shot for the vulnerable. This is an indirect admission on their part that the previous three shots have failed. Why in the world would anyone believe that the fourth injection will work?

The Covid vaccination travesty must be stopped now and paused until effective, reliable, and safe alternatives are found.

Previous articleHave Your Say
Next articlePolice And Army Rebel