You Stupid Boy
Home Chinese Virus War On The ‘Unvaxxed’

War On The ‘Unvaxxed’ 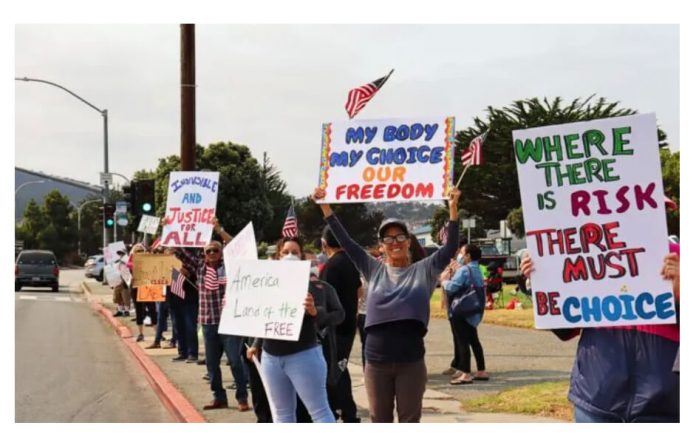 The ruling class is very worried about non-compliant citizens, as it throws a spanner in the works of their long-term plans for us.

I wanted to turn your attention to a side by side comparison map comparing the COVID pandemic of last year to this year. It is a true “photo is worth a million words” tweet from Rational Ground’s Woke Zombie: 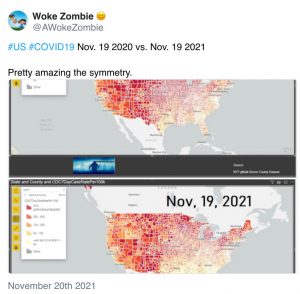 The symmetry is indeed amazing. And the conclusion, after over 600 days of COVID Mania, could not be clearer.

Not a single “public health expert”–hailed mitigation or suppression measure, including the COVID shots, has done anything significant to solve the reality that lots of people get sick during their area’s annual respiratory season. This global war on a virus is going about as well as the war on Afghanistan went when it came to eliminating the Taliban.

The lockdowns failed to stop a virus.

The universal masking regime failed to stop a virus.

The millions and millions of societal restrictions and business closures failed to stop a virus.

And now it’s become pretty clear that the highly-touted “miracle” mRNA shots are failing to stop a virus..

Instead of accepting this reality, world governments are doubling, tripling, and quadrupling down on the madness. Despite incredibly high compliance rates, with an estimated 7.5+ billion COVID shots delivered in arms, the mRNA “cure” has not lived up to its admittedly impossible to achieve standards.

In the span of 6 months, we went from:

“You’re not gonna get COVID if you have these vaccinations”

– to our current reality of another season of lockdowns, restrictions, and the usual, nonsensical “public health measures.”

Seven and a half billion shots later, those of us who’ve followed the data closely have found out that all of the aforementioned statements, endorsed by the most renowned Government Health officials in the world, were complete nonsense.

They were nowhere near remotely close to even representing a scintilla of truth. 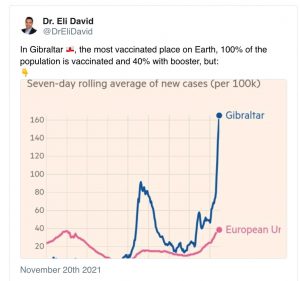 Today we know that the shots serve as something akin to a potential 6-9 month prophylactic with unknown long term side effects. The expiring efficacy, which was best observed through first mover nations like Israel and Ireland, brought about the booster shot regime, but no recognition from world governments that the shots seem to be expiring. The boosters have been sold under this weird idea that you can get “extra protection,” even though you’ve been told you were already “fully vaccinated.”

Government Health officials and major pharmaceutical companies have leveraged these half truths, as part of a CYA campaign for elected officials, and a money grab for Pfizer, Moderna, and those interested in injecting 5 year olds with expiring experimental shots.

And the booster, which is the exact same formulation as the original shots, unsurprisingly seems to have the same lack of virus killing power as the first two shots.

But you and I, we’re not the majority here, sadly. Those of us who are thinking clearly about this issue are a growing coalition, but we still face an uphill battle.

World governments, with the assistance of Big Tech, have convinced the masses, without any legitimate evidence, that it’s the “unvaccinated” who are responsible for our continuing COVID problem.

Check out the logic used by the leader of Austria, the first Western country to mandate COVID shots on the entire population.

“Increasing the vaccination rate — and I think we’re all in agreement on this — is our only way to break out of this vicious cycle of viral waves and lockdown discussions for good,” Chancellor Alexander Schallenberg, who has imposed a nationwide lockdown on his country, told the media this weekend. “We don’t want a fifth wave, we don’t want a sixth and seventh wave.”

Schallenberg is lying and he knows it.

The shots will not prevent another wave of sickness. These “waves” are simply the reality of a seasonal respiratory effect that happens every single year. The global ruling class have been lying to the masses for a long time.

They’d rather not admit to all of these sunk costs, so the political elite will continue to uphold the myth that the COVID shots are still some kind of magic bullet that they are not.

Those who did not comply from the beginning of COVID Mania serve to pose the biggest threat to the power of these maniacal politicians. That’s why they’re attacking us so ferociously.

The political elite pretend as if they care about COVID, but it’s not the virus that is keeping them up at night. It’s those pesky individuals who refuse to bend the knee – those are the ones in the crosshairs.

The control group is the biggest threat to the people in power. They simply can’t survive the political ramifications of a control group outperforming the citizens living under the weight of destructive COVID Mania mandates and societal edicts. 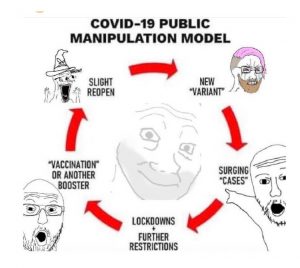 The cycle repeats itself every time there is a new variant. And regardless of whether it’s the Alpha variant or any of a possible 100,000 mutations to the coronavirus, every tyrannical measure taken by governments to “slow the spread” or “stop the virus” has only made overall health significantly worse. As evidenced by the last two years, the government can only cause harm in embracing authoritarian coronavirus policies. Omicron is just their latest excuse. Don’t buy into the new variant hype. Don’t take the bait this time.