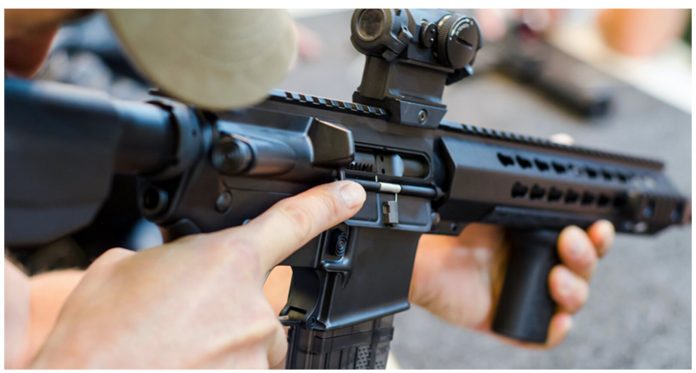 On January 17, 2020, President Donald Trump pointed to the gun control situation in Virginia, noting that it proves once more the Democrats “will take your guns” if voted into office.

He made this point amid the all-out war on guns by Gov. Ralph Northam (D) and the newly elected Democrat majority in the state legislature.

Your 2nd Amendment is under very serious attack in the Great Commonwealth of Virginia. That’s what happens when you vote for Democrats, they will take your guns away. Republicans will win Virginia in 2020. Thank you Dems!

Virginia Democrats started this week intent on passing legislation allowing a total ban on the ownership of AR-15s and similar guns, but they dropped the confiscatory bill after thousands of NRA members flooded the hallways outside state Senate offices.

Yet the Democrats are still pushing an “assault weapons” ban that would only allow AR-15 owners to keep their rifles if they agree to obtain a license from the state police. Democrats are being open about their intention to use the licensing process to form a database listing information of AR-15 owners.

Following a temporary emergency declaration by Governor Ralph Northam, large elements of the Virginia State Police have been photographed arriving in the capital city of Richmond, bringing with them a ROOK armored SWAT carrier.

The temporary emergency has been issued ahead of Monday’s Lobby Day Demonstration, in which tens of thousands of 2nd Amendment activists are expected to descend on the State Capitol in protest of Democrat-sponsored gun control and confiscation bills making their way through the newly-blue state legislature.

As previously reported by The National File, Northam’s emergency declaration has been issued with the intent of disarming protestors, something the event’s organizers, the VCDL, say violates Virginia law, and are currently fighting in court alongside Gun Owners of America.

The battle for the Republic intensifies as the state of Virginia declares a National Emergency in preparation for the Rally Against Gun Confiscation. First and Second Amendment rights advocates are gathering from all across the country to peaceably protest Democrat lawmakers’ sweeping gun control measures that could very well create a constitutional crisis and spark the second American Civil War.

In addition to the arrival of militarized police, recent photos show the construction of fencing around the Capitol building – fencing that appears to act a pen, meant to contain Lobby Day attendees in a confined space.

Since winning a majority in the state legislature last November, largely due to extensive redistricting efforts, Democrat lawmakers have become increasingly aggressive on Second Amendment issues, even floating the ideas of military action against gun owners, and the arrest of law enforcement officers who refuse to cooperate.

In response, thanks to a massive grassroots effort, over 100 Virginia municipalities have voted to become “2nd Amendment sanctuaries,” including Virginia Beach, the state’s largest city, vowing not to enforce any unconstitutional gun laws coming out of Richmond.

When we enacted the stupid gun ban last year, was it at the behest of the worlds left? Was Tarrant acting alone or was he doing the lefts bidding in setting us up for the gun ban. Is this the reason we have never been allowed to see his “manifesto”?

Never have we seen action like this from a government in such a short period of time.