You Stupid Boy
Home NZ Politics We Are Not Alone

it was heartening to see so many like-minded people at last night’s meeting in the Whatawhata Pub. I stopped counting at 180 in the room. Matt is a very good speaker and touched on all the things we are concerned about on YSB , and what this shambles of a government is doing to our country, with the connivance of National and ACT. 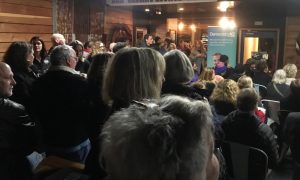 I am reminded of the Gandhi saying;

This is the exact attitude of the MSM, and their present feeling of DemocracyNZ. Matt realises he has got one hell of a big target on his back with the knives about to be drawn. All on the instructions of the Govt. of course.

Most of those in attendance would have been ex-National and ACT voters, The lady on the dor was very busy taking in the $20 membership fee and helping fill out membership forms. Good on her.

Matt said he would have enough paid-up members after last night to go ahead and register the party with the Electoral Commission. Good on him, and good for the country.

Previous articleHow Fast Is That?
Next articleHave Your Say

Look and see how it's done. No one of importance was harmed in this chase. Can you imagine OUR cops doing this? Nah didn't...
Read more
NZ Politics