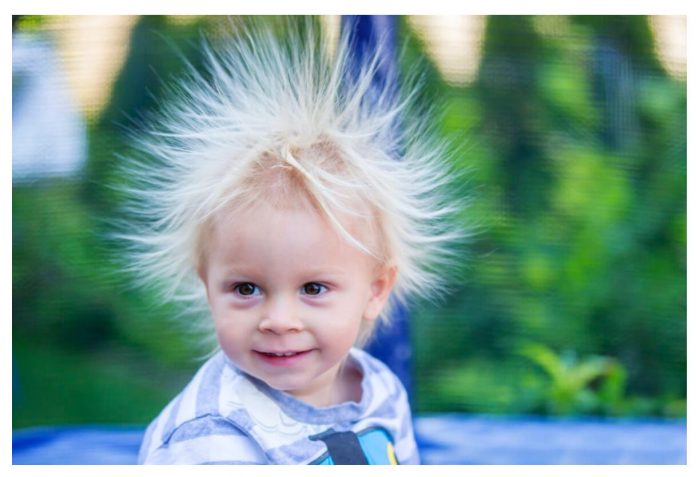 If you walk across a carpet in wool socks, there’s a pretty good chance that the next doorknob you touch is going to surprise you with a spark. Static electricity is so common that it’s easy to forget how weird it is.

But what’s actually happening when you encounter those sparks?

The ancient Greek philosopher and mathematician Thales of Miletus was the first to describe static electricity, in the sixth century B.C., but scientists have struggled for decades to answer that basic question. However, researchers working at the nanoscale have just made a huge step forward in the quest to understand why rubbing two surfaces together can lead to a shock.

No matter how smooth a surface may look, when you zoom in close enough, you’ll notice bumps and pits. Scientists call these imperfections “asperities.” Every surface, from balloons to fibers like wool or hair, is covered in microscopic asperities. And these features are responsible for producing static electricity, said Christopher Mizzi, a doctoral candidate in materials science and engineering at Northwestern University in Evanston, Illinois.

In a study published in September in the journal Physical Review Letters, Mizzi and his co-authors compared the invisible imperfections on everyday objects to the surface of the Earth. If you look at Earth from far away, the planet “looks very smooth, like a perfect sphere,” Mizzi said. We know, however, that in reality, Earth is far from smooth, but you have to look at it closely to see that. It’s only when “you zoom in far enough you notice that there are mountains and hills,” he said. Similarly, familiar objects look smooth until viewed up close.

When the surfaces of two objects rub against one another, their asperities scrape together, creating friction. Scientists have known for a long time that friction plays a role in static electricity. (In fact, the scientific term for static electricity, triboelectricity, shares a root with tribology, which is the study of friction.)

In the new study, Mizzi and his co-authors showed how the asperities that cause friction also cause a shocking difference in electric charge.

Something unusual about static electricity is that it’s easiest to produce using electricity-restricting materials known as insulators; these include rubber, wool and hair. In current electricity — the everyday form of electricity that powers phones, lights and almost all other electronics — electrons create currents by flowing across atoms in conductive materials, like copper wire. But insulators’ atoms don’t let electrons come and go easily; they earn their name by inhibiting electron flow.

In those materials, the cloud of electrons around atoms is usually symmetrical. When you look at these clouds, you “can’t tell up from down, left from right,” Mizzi said.

But if you squeeze that electron cloud, it deforms, becoming asymmetrical. Under the right circumstances, that new shape can distribute voltage unevenly across the material, Mizzi explained.

What does this have to do with wool socks on carpet? As you walk in such footwear, the combination of your body’s weight and your striding motion causes the fibers in your socks to slide against the fibers in the carpet. When the two materials rub against each other like this, the bumps on one surface drag along the asperities on the opposing surface, causing them to bend. When this bending happens, the electron clouds in the atoms that make up the asperities get squished into asymmetrical shapes, causing a very, very small difference in voltage.

Though small, these changes in voltage add up. Asperities are so numerous that the squishing of electron clouds causes a significant buildup of static electricity — one powerful enough for you to feel it when you touch a doorknob or shake someone’s hand.

This newfound understanding of static electricity could influence scientists developing fabrics that produce friction-generated power for charging wearable devices, which could make products more efficient. And with a better understanding of which materials fail to create static electricity easily, engineers can work to create safer manufacturing environments, for example by eliminating dust particles that can spark fires by rubbing against each other.