You Stupid Boy
Home Finance What is quantitative easing? And will it help the economy?

What is quantitative easing? And will it help the economy? 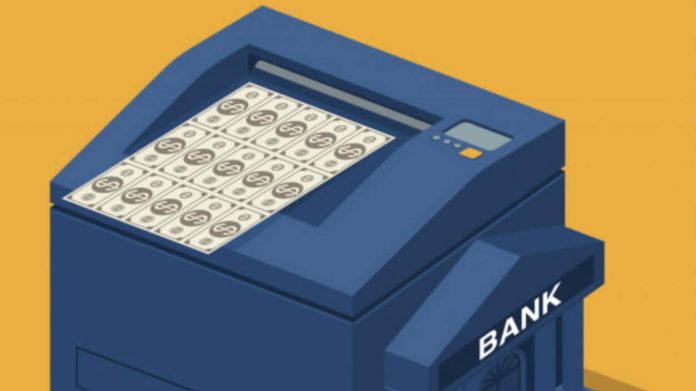 The Reserve Bank of Australia “stands ready” to engage in quantitative easing after running out of conventional ammunition in the fight against a potential recession.

Over the past nine months, it has sliced interest rates to new record lows on four separate occasions in a bid to reduce unemployment and boost economic growth.

The rate cuts started in June and were meant to stimulate the economy by encouraging businesses to invest and consumers to spend.

But a protracted period of weak wages growth persuaded consumers to shut their wallets and pay off some debt. And that discouraged businesses from buying new equipment and taking on more workers – feeding into even weaker spending and lower wages growth.

Treasurer Josh Frydenberg had thought the RBA’s rate cuts and the Coalition’s tax rebate would provide a strong enough incentive for consumers to loosen their purse strings, but the September national accounts proved him wrong.

Household spending growth dropped to its slowest pace since the global financial crisis as heavily indebted Australians lost faith in the economy – causing annual GDP growth to drop to just 1.7 per cent.

And so, amid unanswered calls for more government spending, the Reserve Bank again slashed rates in October, to 0.75 per cent.

Having previously flagged a cash rate of 0.25 per cent as its “effective lower bound,” the RBA consequently only has one more rate cut left in its arsenal of conventional economic weaponry.

But the financial impacts of the coronavirus outbreak are so serious that the economy will need more than low interest rates to survive these uncharted waters.

Which is why governor Philip Lowe said on Monday afternoon that the central bank “stands ready” to follow in the US Federal Reserve’s footsteps and engage in quantitative easing.

What is quantitative easing? 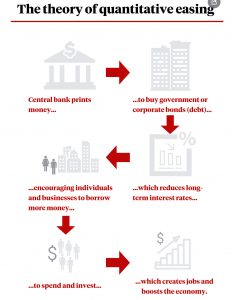 They do this for a few reasons.

Firstly, by buying government or corporate bonds, central banks drive up the price for these bonds and consequently lower the yield, or long-term interest rate, paid on them.

Because there’s no reason to hold onto money when it earns such little interest, this encourages banks to lend more money to individuals and businesses which, in turn, encourages businesses to invest and consumers to spend.

“One of the other purposes of quantitative easing is to signal to markets that the Reserve Bank is serious about keeping the cash rate at very low levels for a very long time,” independent economist Saul Eslake said.

“Another purpose is to encourage investors to take on riskier assets – partly by buying up government bonds so that there aren’t as many available for the private sector, and partly by pushing down interest rates.”

Who else has done it? And did it help?

The US Federal Reserve, Bank of England and European Central Bank used quantitative easing to support their economies after the global financial crisis.

And the Fed and Bank of Japan employed the process much earlier.

Most economists believe QE stopped the financial crisis from developing into the second Great Depression by boosting the supply of credit in the real economy.

But it had plenty of unintended consequences, too.

What are the downsides?

One of the major criticisms of QE is that it worsens inequality by driving up the values of property and shares, which are disproportionately owned by richer people.

By encouraging individuals and firms to borrow more money, the policy also injects lots of debt into the system – which compounds the higher level of risk caused by people moving away from government bonds and into assets such as shares and property.

These are firms with unsustainable business models that would have gone to the wall had it not been for low interest rates.

By keeping these firms in business, low interest rates prevent capital from flowing to more worthy companies and consequently limit the number of new entrants into the market.

Economists argue that this slows the rate of technological disruption and weighs on productivity.

Will it help the Australian economy?

The way Mr Eslake sees it, QE is likely to have less of an impact on the Australian economy than it had on the US and UK economies for two key reasons.

Firstly, “there isn’t much borrowing done by anyone other than governments in Australia at long-term fixed rates”.

Unlike those in the US and Canada, Australian mortgage rates track the official cash rate rather than long-term rates, and the country’s corporate bond market is comparatively small, as firms typically borrow at floating rates or through overseas money markets.

This means the RBA’s purchase of government bonds will put comparatively less downward pressure on firms’ borrowing costs than other central banks’ – thereby reducing the effectiveness of QE in Australia.

Added to this is the fact the Australian government has relatively low levels of debt.

This means there are fewer government bonds for the RBA to purchase, which also minimises QE’s impact.

“That’s not to say they shouldn’t do it, because there’s not much else they can do,” Mr Eslake said.

Should the government do more?

Although lower interest rates might help the economy bounce back once the virus has been contained, they won’t ensure the supply of Chinese goods into the Australian economy, fill empty seats in university lecture halls, or stop shops and offices from temporarily closing.

But the challenges facing the economy are so grave that the government must nonetheless scale up its $17.6 billion stimulus package to support struggling households and businesses, according to Indeed APAC economist Callam Pickering.

QE would stop the financial system from imploding and encourage banks to continue lending, he said, but both companies and workers require more direct assistance.

“QE will help at the margins but it’s not going to have a big impact overall. And we saw with the overseas experience with QE that the policies can work but often take a long time and can be very costly,” Mr Pickering told The New Daily.

“The big issue that the economy faces right now is the liquidity of businesses and households.”

The one thing our Government can do to help keep cash in the system is to stop provisional and terminal tax payments due next month from business owners. This will allow them the spending power to keep this cash in their businesses. There will be huge readjustments in the coming months as incomes drop and these provisional tax payments will eventually not be owing.

Previous articleDo you believe her?
Next articleNo words necessary