You Stupid Boy
Home Travel What Next? 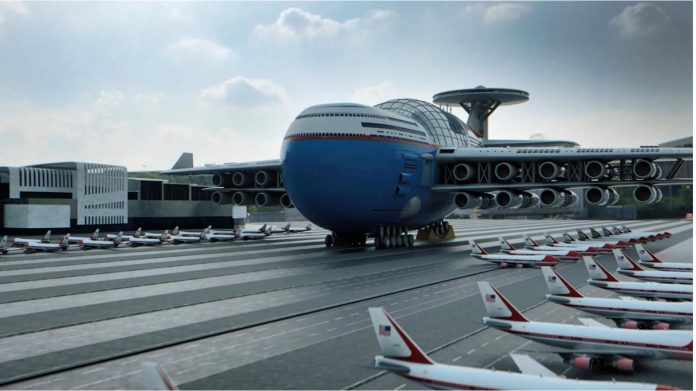 This nuclear-powered ‘flying cruise ship’ could stay airborne for years at a time, carrying 5,000 guests

Forget brief trips to space. A nuclear-powered flying hotel promises to keep your head permanently in the clouds. The high-flying Sky Cruise concept sees a gigantic airplane skin to a cruise ship that’s able to be constantly airborne. Developers envision 5,000 guests arriving by passenger planes that dock with it.

With a small nuclear reaction powering the engines, the Sky Cruise would be able to stay in flight for several years at a time. If wanting to check out a nearby destination, guests simply hop on a flight to travel back to Earth. 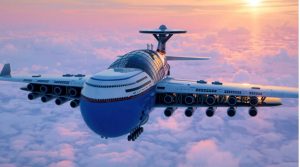 “I believe the current flying experience has become tiresome and outdated, and it’s time for new innovations that can make our flight experience more comfortable. Hence, I imagined a world where flying from one place to another turned into a joyous experience rather than fighting for leg space,” says Hashem in a statement, per South West News Service.

“I was searching for a 3D model that features a futuristic design of an airplane, and came across this 3D model by Alexander Tujicov. It’s based on an earlier design created several years ago by Tony Holmsten,” he continues. “I bought the 3D model and decided to animate it. I wrote the script and edited the video to showcase what it could look like in real life.”

Like a traditional sea-based cruise ship, guests can enjoy luxuries including a 360-degree panoramic platform, an entertainment deck, shopping malls, gyms, swimming pools, restaurants and bars, and theaters and cinemas.

There is also capacity for business events, meetings and even a venue for getting married. 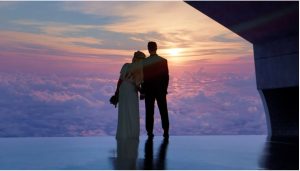 “I believe some people won’t mind a longer flight as long as if it’s comfortable. Think of sky hotel as a vacation place that moves around and takes you where you want to go,” says Hashem. “While you’re enjoying your vacation in the sky cruise, you’re being transported to your destination. The sky cruise itself won’t land, but you’ll still get to land where you want thanks to a docking port that allows airplanes to attach themselves and exchange passengers with the sky cruise.

“Once the sky cruise reaches your destination, you board a tiny aircraft or a commercial airliner that lands you on the surface.”

Some online commentators are pessimistic about whether such an idea could work, with one posting, “If physics and aerodynamics didn’t exist, then this vessel might actually be able to take off.”

But Hashem is realistic about the feasibility of the idea, and believes it could become a reality before 2040. 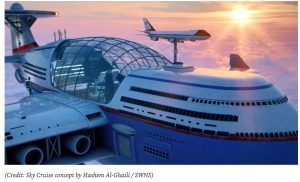 “George Bernard Shaw said “both optimists and pessimists contribute to society. The optimist invents the aeroplane, the pessimist the parachute’,” he says. “It’s nice to see people point out the flaws of the design and attempt to propose solutions to them, which is what we need to make it more perfect. It’s like a group of people working together on a single project.

“As for those who believe the concept will never work because it ignores important aspects of engineering, remember what Einstein said, “if at first the idea is not absurd, then there is no hope for it,” he adds. “I would go for 2030s or 2040s at latest for possibility of Sky Cruise. All we need is sufficient energy for the take-off. That’s why nuclear energy was part of the design.

“I believe it’s a matter of time before powerful nuclear reactors become small enough to fit inside a plane that size. The UK is one of the top countries working on small nuclear reactors. These reactors are likely to become fully operational by 2029. A few tweaks to the design and we’ve got a massive flying hotel that could roam our skies someday.”

Our Roads Are Fucked. ORAF www.oraf.nz Driving around on the roads in the past month has highlighted just how bad our roads have become since Liarbour...
Read more
Travel

Back in the day, I was living in outback Australia in the small mining village of Coober Pedy. Tried my hand at opal mining...
Read more