You Stupid Boy
Home Leftie Stupidity What Next? 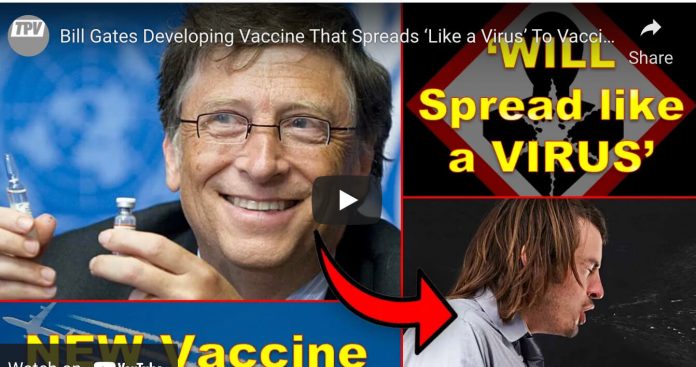 A team of Bill-Gates linked research scientists have announced they are developing a vaccine that spreads “like a virus,” meaning people will “catch” the vaccine like they would a cold or flu, and without consenting to vaccination.

The research is being subsidized by high-profile funding organizations, including the U.S. National Institutes of Health (NIH), which has longstanding and close financial ties to the Bill & Melinda Gates Foundation.

Self-spreading vaccines have roots in efforts to reduce pest populations. Australian researchers described a virally spread immunocontraception, which hijacked the immune systems of infected animals—in this case a non-native mouse species in Australia—and prevented them from fertilizing offspring.

Is this how the elites consider the human species? A pest population that needs to be culled?

Researchers have been working on experimental “self-spreading vaccines” that could stop a virus leaping from animals to humans — a phenomenon scientists call zoonotic spillover.

A virus that confers immunity throughout an animal population as it spreads in the wild could theoretically stop a zoonotic spillover event from happening, snuffing out the spark that could ignite the next pandemic. 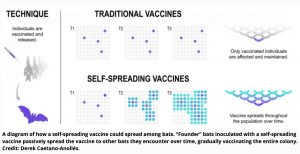 The earliest self-spreading vaccine efforts targeted two highly lethal infectious diseases in the European rabbit population (myxoma virus and rabbit hemorrhagic disease virus). In 2001, Spanish researchers field-tested a vaccine in a wild rabbit population living on Isla del Aire, a small Spanish island just off Menorca. The vaccine spread to more than half the 300 rabbits on the island, and the trial was deemed a success.

While researchers may intend to make self-spreading vaccines, others could repurpose their science and develop biological weapons. Such a self-spreading weapon may prove uncontrollable and irreversible.

We don’t have to dig very deep for a historical example of weaponized biology. As the apartheid-era South African biowarfare program shows, social, political, and scientific pressures can lead to the misuse of biological innovation.

Codenamed Project Coast, South Africa’s program was primarily focused on covert assassination weapons for use against individuals deemed a threat to the racist apartheid government. In addition to producing contraptions to inject poisons, Project Coast researchers developed techniques to lace sugar cubes with salmonella and cigarettes with Bacillus anthracis.

While there have been many biowarfare programs, including several that were far more elaborate and sophisticated, the South African program is particularly relevant in thinking through malicious uses of self-spreading vaccines. One of Project Coast’s research projects aimed at developing a human anti-fertility vaccine.

The idea took hold during a time of widespread concern over worldwide population explosion. Schalk Van Rensburg, who oversaw fertility-related work at a Project Coast laboratory, told South Africa’s post-apartheid Truth and Reconciliation Commission, a forum for examining the sordid history of the era and laying the foundation for future peace and tolerance, that he thought the project was in line with the World Health Organization’s attempts to curb rising global birth rates. He believed it could bring his lab international acclaim and funding. According to Van Rensburg, Wouter Basson, the director of the biowarfare program, said the military needed an anti-fertility vaccine so that female soldiers would not fall pregnant.

While some of the scientists involved in the project denied awareness of ulterior intentions or even that their fertility work was part of a military endeavor, Van Rensburg and Daniel Goosen, a lab director, told the Truth and Reconciliation Commission that the real intention behind the project was to selectively administer the contraceptive in secret to unwitting Black South African women.

In the end, the anti-fertility vaccine was not produced before Project Coast was officially closed down in 1995, 12 years after it was initiated. An early version was tested in baboons, but never in humans. South Africa isn’t the only country to try and forcibly sterilize parts of its population. European countries, including Sweden and Switzerland, sterilized members of the Roma minority in the early half of the 20th century and some, like Slovakia, continued even beyond that. More recently, analysts have alleged that the Chinese government is sterilizing women in Xinjiang, a province with a large population of Uighur Muslims.

It doesn’t take a massive leap of the imagination to see how the aims of South Africa’s anti-fertility vaccine project would have benefited from research into self-spreading vaccines, particularly if you combine it with current developments in pharmacogenomics, drug development, and personalized medicine. Taken together, these strands of research could help enable ultra-targeted biological warfare.

Is this Bill Gates’s real motive?

Recently, the Defense Advanced Research Projects Agency (DARPA), sometimes thought of as the US military’s research and development wing, has gotten involved in the research. The University of California, Davis, for example, is working on a DARPA-administered project called Prediction of Spillover Potential and Interventional En Masse Animal Vaccination to Prevent Emerging Pathogen Threats in Current and Future Zones of US Military Operation.

According to a pamphlet, the project is “creating the world’s first prototype of a self-disseminating vaccine designed to induce a high level of herd immunity (wildlife population level protection) against Lassa virus … and Ebola.”

Previous articleCyber Attacks Costly For The West
Next articleHave Your Say