You Stupid Boy
Home US Politics Who are "The Deplorables" Again?

Who are “The Deplorables” Again? 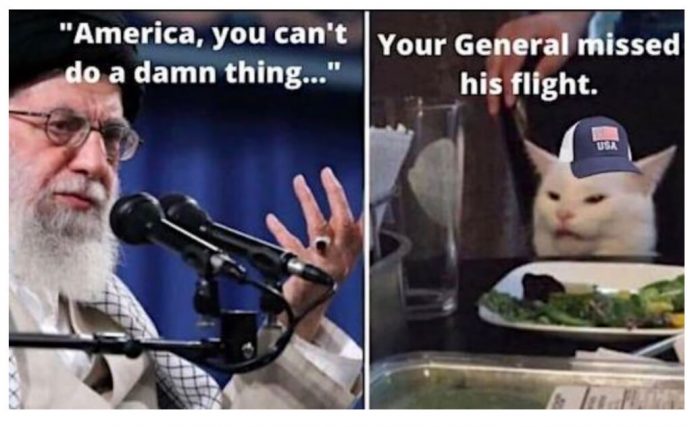 Apparently, keeping the appearance of peace is more important to them than deterring Iranian aggression and actually working toward real peace.

Former Vice President Joe Biden charged in a statement Thursday that Trump “tossed a stick of dynamite into a tinderbox.”

Meanwhile, Sen. Elizabeth Warren of Massachusetts initially admitted “Soleimani was a murderer, responsible for the deaths of thousands, including hundreds of Americans,” before issuing another statement criticizing Trump instead for “marching toward war with Iran”

Sen. Bernie Sanders of Vermont fell right in line, saying, Trump’s “dangerous escalation” puts the U.S. “on the path to another war — potentially one that could be even worse than before.”

All three lawmakers said Trump had no authorization to act toward Iran, despite being commander in chief of the nation’s armed forces.

“Tonight’s airstrike risks provoking further dangerous escalation of violence. America — and the world — cannot afford to have tensions escalate to the point of no return,” Pelosi said in a statement Thursday night.

“The Administration has conducted tonight’s strikes in Iraq targeting high-level Iranian military officials and killing Iranian Quds Force Commander Qasem Soleimani without an Authorization for Use of Military Force (AUMF) against Iran. Further, this action was taken without the consultation of the Congress,” she added.

Trump on Friday defended his decision to order the killing of Soleimani in a drone strike the previous night, saying the action was meant to prevent a war, not start one.

“Soleimani was plotting imminent and sinister attacks on American diplomats and military personnel, but we caught him in the act and terminated him,” the president continued.

Soleimani and Abu Mahdi al-Muhandis, the deputy commander of Iran-backed militias known as the Popular Mobilization Forces, were killed, along with five others, in the drone strike at the Baghdad International Airport.

The very fact he was taken out in Baghdad — while meeting with the Iran-backed militia leader responsible for the death of an American last week and the attack on the U.S. embassy this week — only strengthens the case that Trump’s order to neutralize him was justified.

Soleimani was directly responsible for thousands of human rights violations and the deaths of hundreds of American soldiers.

He was in Iraq to harm our embassy, our servicemembers and our country.

We should be celebrating this American victory. pic.twitter.com/jiS1FVrlnT

“This isn’t ‘America’s the bad guy’ here,” Waltz told Fox Business Network on Friday. “Iranians have been escalating. The president has shown restraint, calling back an air strike [against Iran] last year, when he thought it was disproportionate.”

“We don’t wait until more Americans are dead, when you have intelligence that it’s coming,” the congressman said. “You take preemptive action to stop it in the first place.”

Trump has displayed a level of confidence and resolve in the world stage not seen during the eight years of Barack Obama’s administration, which witnessed both the rise of the Islamic State caliphate and Iran running amok throughout the region as the U.S. bent over backwards to secure a nuclear deal with Tehran.

By contrast, Trump’s leadership helped bring about the demise of the caliphate. Further, he pulled America out of the flawed nuclear deal, and now through the killing of Soleimani, is putting a check on Iran’s unfettered aggression.

Biden, Warren and Sanders all appear ready to return to the Obama-style appeasement policy in dealing with Iran.

That day has passed and — hopefully, for the future security of America and the world — will never return.