You Stupid Boy
Home Chinese Virus WHO is missing in action.

WHO is missing in action. 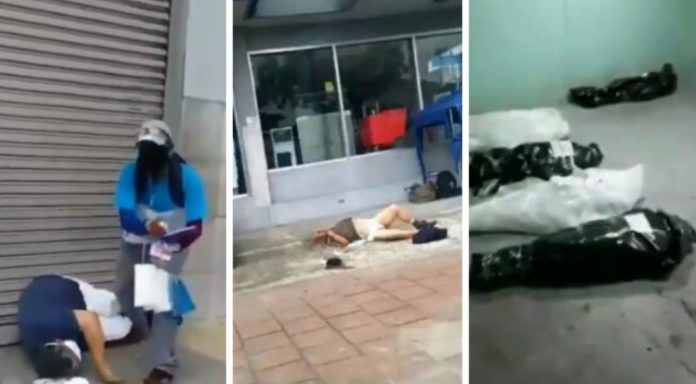 Medical professionals believe the true number of COVID-19 cases in Ecuador could be five times the official count or higher.

Ecuador’s major port city of Guayaquil has become a scene of absolute horror as health authorities appear unable to contain the rapid spread of the coronavirus, resulting in corpses being abandoned in the streets.

The sudden spread of the disease in the Andean nation has made the country the epicenter of the pandemic in Latin America, with regional newspapers dubbing Guayaquil “The Wuhan of Ecuador.”

According to officials, over 400 bodies have been recovered both from the streets and from empty buildings. The situation has rapidly overwhelmed funeral homes and mortuaries in the city of 3.6 million.

On Wednesday, Vice Minister of Comprehensive Healthcare Ernesto Carrasco announced that the South American country’s Emergency Operations Committee had registered 3,163 infections and 120 deaths, with 82 of the deaths occurring in Guayas province, whose capital is Guayaquil.

However, Associated Press reports that medical professionals believe the true number of coronavirus cases may be at least five times the official count.

Shocking video shared online showed people collapsing in the middle of the streets and corpses being draped in cloth by loved ones or burned in the open by frightened residents, while images have filtered out depicting coffins strewn throughout the city—suggesting that authorities haven’t yet tallied the recent wave of deaths.

Guayaquil Mayor Cynthia Viteri, who has announced that she has also been infected, has demanded that the federal government of President Lenin Moreno should step up efforts to collect bodies, reports Los Angeles Times.

In a video message posted to Twitter, she said:

“They’re leaving them in the villages, they fall in front of hospitals … No one wants to recover them.”

The federal government has come under sharp criticism for its handling of the pandemic as well as for the neoliberal policies enforced prior to the crisis, which saw thousands of nurses, doctors, and healthcare workers being sacked since President Moreno came to power in May 2017.

Moreno has backtracked on a proposal to dig a mass grave for the dead in Guayaquil as the city’s ruling Social Christian Party has insisted on residents receiving a proper “Christian burial.”

In the meantime, very few coronavirus tests have been made available to the public, with the cost of testing being far too expensive for most Ecuadoreans.

Along with the spiraling mortality rates, the government’s poor handling of the crisis has raised fears that the spread of CoViD-19 will be far more widespread than the government is willing to acknowledge—as well as a terrifying preview of what awaits the broader region.