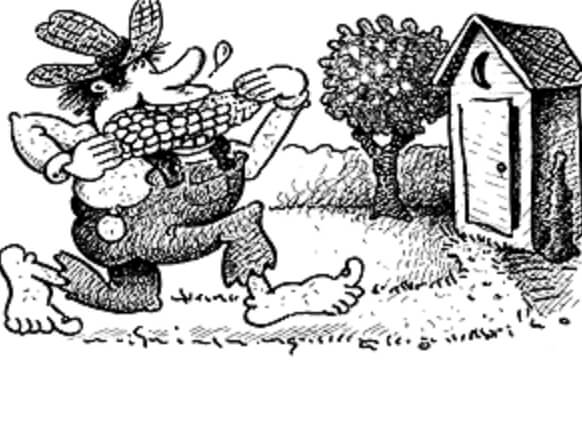 What did people use before toilet paper was invented?

Corncobs. You may not believe this, but it was once common practice in rural America to leave a corncob hanging from a string in the outhouse for purposes of personal hygiene. The string, I gather, was to permit the cob to be reused. For those who were punctilious in these matters, or else blessed with an abundance of corncobs, a box of disposable cobs might be provided instead. In coastal regions, the cob might be replaced by a mussel shell.

For those who had access to it, paper from discarded books or newspapers was often preferred to either of the foregoing. The meteoric growth of the Sears Roebuck company, for instance, is thought to be partly attributable to the protean nature of its catalogs, which, historians tells us, might serve a family of regular habits for an entire season. As with the cob, the catalog would be hung in the outhouse on a string and pages torn off as needed. It’s said the use of coated stock, which was nonabsorbent, was a source of great consternation to farm families when Sears began printing color pictures in the catalog earlier in this century.

English lords, in attempting to teach their sons to be cultivated gentlemen, often advised purchasing an inexpensive volume of verse for use in the loo. The idea, of course, was that while you were sitting there in a contemplative state you’d be able to read a few stanzas, following which the paper could be put to other ends, so to speak.

Previous articleWoke Are Soooo Entitled.
Next articleHave Your Say