You Stupid Boy
Home Leftie Stupidity Who Would Argue With This? 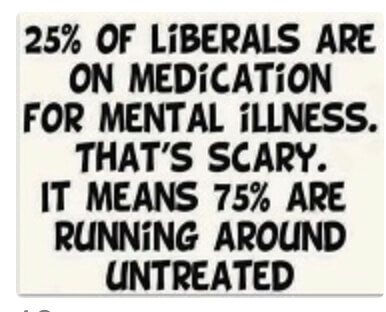 Pew: Over Half of Liberal White Women Mentally Ill

It took a while, but the results of a Pew Research Center study released a year ago have come to light, revealing that over half of liberal white women have been diagnosed with a mental health condition. 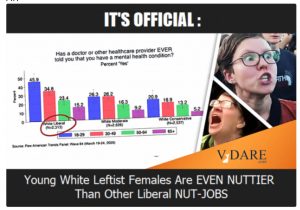 Evie Magazine learned about it on Twitter and breaks the belated news:

The study, which examined white liberals, moderates, and conservatives, both male and female, found that conservatives were far less likely to be diagnosed with mental health issues than those who identified as either liberal or even “very liberal.” What’s more, white women suffered the worst of all. White women, ages 18-29, who identified as liberal were given a mental health diagnosis from medical professionals at a rate of 56.3%, as compared to 28.4% in moderates and 27.3% in conservatives. 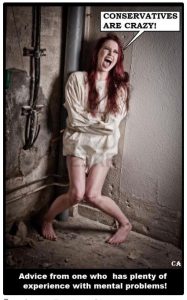 It’s truly unfortunate that so many women are facing these kinds of issues, and that this prevalence of mental illness among progressive women might be being weaponized for political purposes.

Still more unfortunate is that the country is ruled by the tyrannical fools they vote for.

Maybe moonbattery causes the mental illness, rather than vice versa:

There’s also the unrelenting focus on oppression, verbal violence, and micro-aggressions. We know that building resiliency against hardship is the best weapon against depression and anxiety, yet progressive ideology forces its followers to wallow in feelings of helplessness and victimhood. 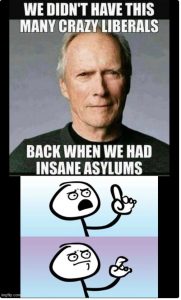 The reasons to reject wokism are without number.

1/n Two interesting findings thus far from my analysis of Pew’s March 2020 COVID-19 survey. First, white (and especially ‘very’) liberals are far more likely than all other ideological-racial subgroups to report being diagnosed with a mental health condition. pic.twitter.com/RynS9lk0jR 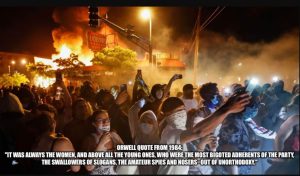 Going woke certainly has an affect on all these “Karens”

We already knew this. Nice to see official confirmation though.

Cuomo’s New York Bribes Prisoners With Parties and Sex if They Get COVID Jab Prisioners in New York are now being offered food, parties and...
Read more
Leftie Stupidity

Liar-in-chief at it yet again !!
Read more
Chinese Virus

The Triumph of Evil