You Stupid Boy
Home Leftie Stupidity Why Are The Young Embracing Socialism?

Why Are The Young Embracing Socialism? 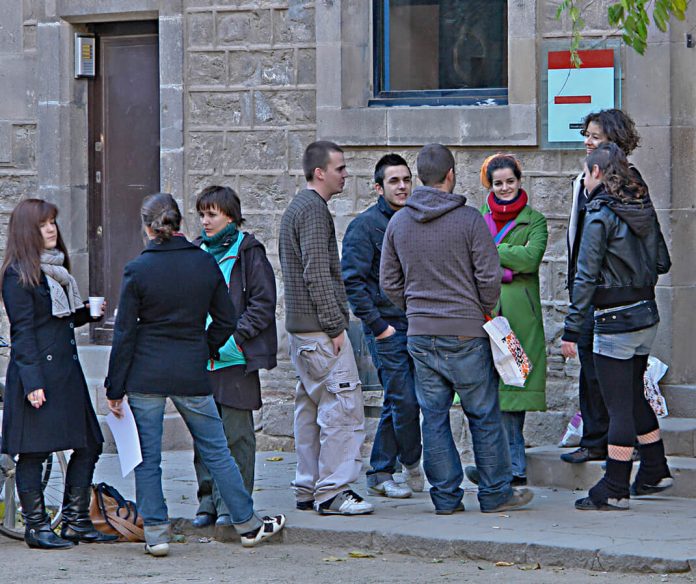 In the midst of the confusion and chaos of the Iowa Caucus, it’s clear that Bernie Sanders is a frontrunner and a force to be reckoned with in the Democratic race for the presidency.

For many middle-age and older Americans, it’s surprising that so many young people are ardent Sanders supporters. After speaking with a number of people in their 20s to early 30s, it shed light on their intense interest in Sanders and his brand of democratic socialism.

The schools have not taught much about the ravages of socialism and communism in China, Russia, Venezuela and other countries. To young people, socialism is an abstract concept. Due to their current situations, many young people feel that they have little to lose if America pivots from capitalism to socialism. Since they don’t view their current circumstances and future outlook with any degree of confidence, it’s worth it to take a chance and change things up.

Younger people face the frightening realization that they may be the first generation to have a lower standard of living than their parents. They are understandably concerned about how they can be self-sufficient, financially independent and live the American Dream, which was promised to them.

A combination of crushing student loan debt, low-wage jobs and escalating home and rental costs has a huge impact on Millennials and Gen-Zers. If a person does not feel financially secure nor confident about their future, it’s natural to hold off making big commitments, such as getting married, purchasing their first home and having children. These things were once taken for granted by older generations. Now, it’s a hard-to-reach and nearly impossible dream for many people.

If a young person wants to buy a home, they will have to come up with a sizable down payment and closing costs. To maintain the home, they’ll have to pay high real estate taxes, interest on the loans and upkeep to the property. Add a car—if you live in the suburbs—and home furnishings. For a person paying off a large student loan with a job that doesn’t pay that well, this is an unattainable goal.

If you decide to rent an apartment in any large urban city, the costs are shockingly high. You’ll need a security deposit, first month’s rent and application fees, all paid upfront. Add in the costs of smartphones, insurance, car payments, clothes, food, cable television and other expenses  and you’re in debt. Using your credit to carry you through becomes another high-interest-bearing anchor weighing you down financially.

Without having any extra money, you will not be able to save, participate in the stock market that has provided a windfall for aging Boomers with money to invest or consider an entrepreneurial endeavor.

Since more high school graduates attend college than ever before, the value of the degree, specifically in certain majors, has been diluted. The vast amount of liberal arts graduates, who don’t possess the requisite skills for specialized, well-paying jobs, find themselves underemployed or unemployed. They’re forced into the gig-economy, serving as a barista at Starbucks or going for a graduate degree—creating even more debt.

A lot of this is not their fault. Parents and adults somehow allow 17 or 18 year olds to sign binding contracts—that can’t even be waived in bankruptcy—that forever chains them to hundreds of thousands of dollars in debt. At that tender age, they’re not permitted to legally drink or smoke, but they can sign their financial lives away.

To be fair, there are those who major in STEM-related subjects, such as technology and engineering, and are highly sought after and realize sizable salaries right out of college.

Ironically, the younger generations may be in for a windfall in the future. As their Baby Boomer parents pass away, they stand to receive a large inheritance. It could be the largest wealth transfer in American history.

The catch is that if the market goes down appreciably or crashes, like in the 2008 financial crisis, the parents will sell their stocks at fire-sale prices and there won’t be much left over for their children. If all of the Boomers start selling their homes when they retire—which they are now doing in large numbers—to downsize their lifestyles, housing prices may collapse. This will also lessen the amount of money that could be transferred over to their kids.

In light of their situation, it’s not surprising that Bernie Sanders is surging in the polls and the idea of socialism is gaining traction among young people.

The left here could capture this huge pool of potential votes by doing one thing. Do away with the student loans and they will have a group of voters for life. It wouldn’t surprise me if closer towards the election they announce that as a start they are remitting all interest on these loans. Then as a sweetener, they will say if you vote us in for another term, we will get rid of all student loans.

If the polls for Labour go the way well all want, then I expect them to do just this.

Previous articleAn Establishment in Panic
Next articleHave Your Say