Winston looking after his mates? 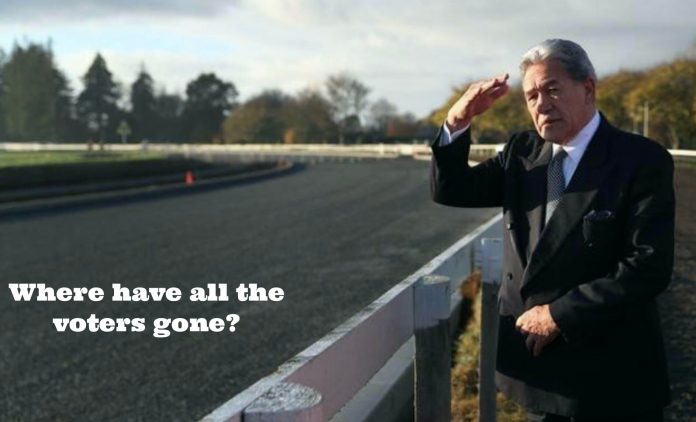 Four people have been granted border exemptions to enter New Zealand for work on an all-weather horse-racing track in Cambridge, sparking questions from the Opposition about what the government is prioritising during the Covid-19 pandemic.

“Unfortunately, the guys were here to mix up pre-lockdown and then had to go back to Australia. They went back and just had a bit of a struggle to get back in. But we’ve now got an exemption for them to come over.”

The workers were granted entry from Australia to help construct the synthetic track, which was championed by New Zealand First and funded with $7 million of taxpayers’ money from the Provincial Growth Fund (PGF).

The National Party wants to know why they were given priority to work on the track in Waikato when thousands of other people remain locked out of New Zealand.

A spokesperson for Immigration Minister Kris Faafoi said the Martin Collins staff were assessed as being critical workers, as they had unique skills not found in New Zealand.

National’s Regional Development spokesperson Michael Woodhouse questioned why a synthetic horse-racing track was a priority when it came to approving border exemptions.

“There are very many thousands of well-meaning applications from loved ones, partners and other essential skills workers that are simply not even being considered. So why these workers came through when others were being blocked is a very important question that needs to be answered by the government.”

The think tank had surveyed its members, including some of the largest companies in New Zealand, and found border exemptions were rare and were processed inconsistently, he said.

“The border exemptions are as scarce as a winning lottery ticket and whether or not they get one seems to be a matter of chance.”

Cabinet guidelines say short-term workers, coming into the country for fewer than six months, must have unique experience not found in New Zealand.

Partridge told RNZ’s Checkpoint that many businesses were struggling to get skilled workers into the country under the current rules.

“We heard stories of major plant commissioning having to be deferred and of senior executives and their families being marooned overseas after resigning from their jobs to take up leadership positions in New Zealand.”

Faafoi’s spokesperson said the decision to grant border exemptions for the Cambridge race track workers was made by officials, without input or advocacy from any politicians.

It’s the third all-weather race track funded by the government, paid for using nearly $30 million from the Provincial Growth Fund.

The tracks have been championed by New Zealand First.

Officials from the Provincial Development Unit (PDU) recommended declining funding for the three tracks when a bid was first made in 2018 by the New Zealand Racing Board and New Zealand Thoroughbred Racing.

In documents obtained by RNZ under the Official Information Act, the PDU said the projects didn’t meet PGF criteria and that it was “unknown” as to whether they would create permanent jobs.

The documents also show PDU officials assessed that one of the tracks, at Riccarton Park, was not eligible for Provincial Growth Fund money because it was in Christchurch City and the fund is for the provinces.

But all three tracks were all eventually paid for from a part of the PGF called ‘Manifesto Commitments to the Regions’ – a fund set aside for projects in the Labour-New Zealand First coalition agreement.

Last week the Auditor General criticised the Manifesto fund, which has paid out $45 million for seven projects, for a lack of transparency and for operating as a “fund within a fund”.

The politics are of little interest to the Cambridge Jockey Club however.

Its chief executive Mark Fraser-Campin said he was looking forward to having the project completed, now that the Australian workers had the exemptions enabling them to come over and finish the track.

“I know it’s going to make a huge difference to Cambridge.”

The minister responsible for the PGF, New Zealand First’s Shane Jones, declined an interview with RNZ.

In a statement, he said he and the three Labour Party Ministers who signed off on funding for the race tracks stood by their decisions.

Jones said wet weather meant about 40 race meetings were postponed each year and the synthetic tracks would support the $1.6 billion racing industry which provided about 15,000 full-time jobs.

Previous articleHave Your Say
Next articleBar codes show source of manufacture by Country.