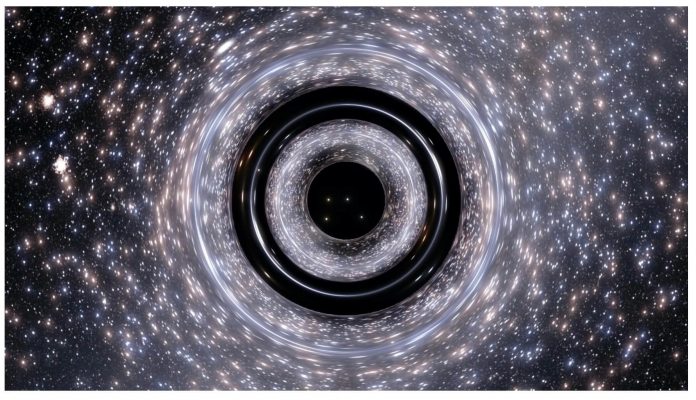 Scientists Say A Supermassive Black Hole Glitched, Inexplicably Turning Off and On Again

The corona at the center of a black hole abruptly disappeared and then reformed, essentially turning the black hole off and then starting up again.

Supermassive black holes are already recognised as some of the most bizarre objects in the universe. Past their high-energy coronas, inside the event horizons, the known laws of physics seem to shut down.

But recently, astronomers observed something happening to a black hole that seemed impossible even by the object’s own outlandish standards.

About 100 million light-years away, the super hot, ultrabright corona at the centre of a supermassive black hole (1ES 1927+654) abruptly disappeared and then reformed, essentially turning the black hole off and then starting up again, as though it had glitched. It is the first time such a phenomenon has ever been documented.

“It was so strange that at first we thought maybe there was something wrong with the data. When we saw it was real, it was very exciting. But we also had no idea what we were dealing with; no one we talked to had seen anything like this.”

Ricci and the other MIT astronomers studying the event believe a rogue star may have caused a massive “tidal disruption,” that may have acted like “a pebble tossed into a gearbox,” which subsequently caused the entire corona of highly charged particles to come collapsing into the black hole.

As a result, the black hole’s brightness diminished precipitously, dimming by a factor of 10,000 in under a year.

“We expect that luminosity changes this big should vary on timescales of many thousands to millions of years,” Erin Kara, assistant professor of physics at MIT and co-lead on the study, explained. “But in this object, we saw it change by 10,000 over a year, and it even changed by a factor of 100 in eight hours, which is just totally unheard of and really mind-boggling.”

So, from the point of view of scientists on Earth, the black hole seemed to just eat itself, close up shop, and disappear from radar, something corroborated by multiple telescopes and observed in X-ray, optical, and ultraviolet wave bands. But that wasn’t the end. Since the core singularity of the black hole still existed, it began to gobble up particles again and spin up a new accretion disk, re-generating its old luminosity in only months.

The MIT team first discovered the anomaly in March 2018, when they recorded an active galactic nucleus (AGN) using ASSASN, the All-Sky Automated Survey for Super-Novae. They also observed the black hole with NASA’s NICER, an X-ray telescope mounted to the International Space Station.

“This seems to be the first time we’ve ever seen a corona first of all disappear, but then also rebuild itself, and we’re watching this in real-time,” Kara recalls. “This will be really important to understanding how a black hole’s corona is heated and powered in the first place.”

Kara and her co-authors believe the sudden “glitch” could be caused by the accretion disk’s magnetic field lines collapsing. They published their findings in Astrophysical Journal Letters.