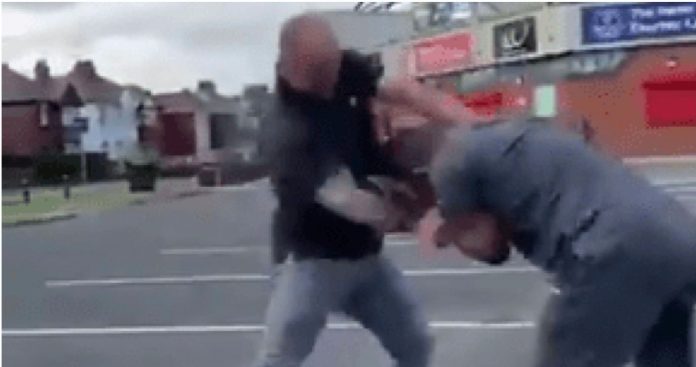 A video out of the UK shows a father beating up a migrant who he accuses of trying to snatch his 11-year-old daughter off the street.

The incident reportedly occurred in the northern English town of Widnes, Cheshire.

The clip shows the man filming the video driving into a parking lot as he encourages the father to attack the “nonce,” which is British slang for pedophile.

The father then lands numerous blows to the migrant’s head as he falls to the ground.

“That’s my daughter,” says the father to the migrant as the man filming the video continues to berate him, saying, “Fucking nonce off somewhere else.”

“That’s what you get…fucking chasing little girls round, you fucking horrible immigrant cunt,” he adds.

A young girl, possibly the migrant’s intended target, then approaches the man calling him a “dirty little knob” as she tries to slap him.

“We don’t speak your language and we don’t touch little kids, you fucking little smackhead,” the man filming the clip tells the migrant.

The police are then called, but according to several Twitter users with knowledge of the incident, they ended up arresting the father.

The UK has been plagued by Pakistani and Bangladeshi grooming gangs who specifically target white girls for abduction and sex trafficking.

A 2015 investigation found that one local council deliberately ignored the abuse of 1400 girls in Rotherham over many years due to fears over “political correctness.”

Previous articleHave Your Say
Next articleNot all masks are equal