You Stupid Boy
Home Did You Know? World’s Largest Iceberg 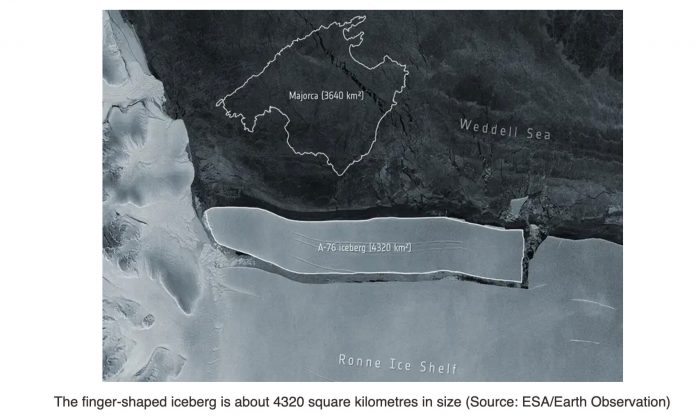 An iceberg bigger than Majorca that calved off an Antarctic ice shelf has been spotted by satellites, and declared the world’s largest iceberg.

The finger-shaped iceberg, which is about 4320 square kilometres in size, isn’t thought to have been caused by anthropogenic climate change.

Named A-76, the iceberg broke off the Ronne ice shelf into the Weddell Sea in recent days, according to the European Space Agency. The area has been spared an influx of warm ocean water affecting other parts of western Antarctica, which is threatening to release huge glaciers such as one called Thwaites.

“It’s not an area that is undergoing any significant change because of global heating. The main message is it’s part of a natural cycle,” says Alex Brisbourne, a glaciologist at the British Antarctic Survey.

The tabular-shape of A-76 is typical of icebergs, and the horizontal lines on it are a sign of the stresses that caused it to break from the ice sheet, says Brisbourne. The part of the ice sheet that it calved from was floating, so the iceberg shouldn’t have any impact on sea level rise.

While A-76 is the largest iceberg in the world at the moment, it wouldn’t make the pantheon of the 10 biggest icebergs in history.

“In the grand context of things this is not humungous. Of course it’s an evolution in the ice shelf,” says Mark Drinkwater of the European Space Agency.

Drinkwater says that the Ronne ice shelf is in a fairly “steady state” where it expands after losing iceberg like this. One of its biggest calving events was in 1986, with icebergs totalling 11,000 square kilometres breaking off, followed by smaller ones in 1998, 2000 and 2015.

However, the new iceberg could still have a significant impact depending on where it ends up. Another iceberg last year, A-68a, at one point appeared on a pathway that could harm wildlife on the island of South Georgia but eventually broke up.

“It’s big enough to influence the ocean, and the salinity of the ocean. Depending on the trajectory, it could be as significant as A-68a,” says Brisbourne.

Developing The World’s ‘Hottest’ Heat Pump Researchers working with industrial partners have developed the world’s first heat pump producing temperatures of up to 180 degrees...
Read more
Did You Know?