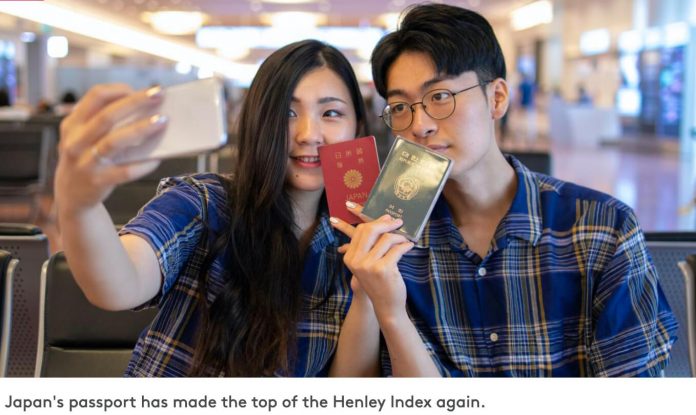 The most powerful passports in the world for 2020 have been revealed, and Asian countries continue to dominate the list.

And while Australia’s position on the ranking has remained the same – in ninth spot, along with New Zealand, Malta, Czech Republic and Canada – Japan, Singapore and South Korea have taken the top three spots.

The list was compiled by the Henley Passport Index, which analyses how many countries a passport holder can enter visa free or on a visa-on-arrival basis.

Japan’s winning streak comes after they unseated Germany from its long-held first position at the beginning of 2018.

The US and the UK, along with New Zealand, all dipped in power for 2020. The UK passport – which is ranked eighth – was No.1 for three years running from 2013 to 2015. The US passport, also ranked eighth, joined the top spot in 2014 but has slipped since.

On the other end of the scale, the lowest ranked passports were Somalia, Pakistan, Syria, Iraq and Afghanistan.

Dr Christian Kaelin, the creator of the index and chairman of Henley and Partners, said Asian countries’ dominance in the index was a “clear argument for the benefits of open-door policies and the introduction of mutually beneficial trade agreements”.

“Over the past few years, we have seen the world adapt to mobility as a permanent condition of global life,” he said.

“The latest rankings show that the countries that embrace this reality are thriving, with their citizens enjoying ever-increasing passport power and the array of benefits that come with it.”

But while the latest results show that globally people are more mobile than ever, they also indicate a growing divide when it comes to travel freedom, with Japanese passport holders able to access 165 more destinations around the world than Afghan nationals, for example.

The Henley Passport Index is the most recognised because it uses data from the International Air Transport Association and provides an easy way for travellers to know where they can travel without a visa.

The worst passports to hold are:

Previous articleHave Your Say
Next articleDon’t Get Lost At Sea